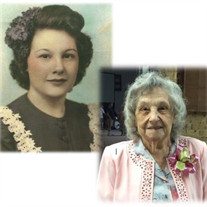 Dorothy Irene Thomas Wittenauer was born on June 19th, 1926 to Steven and Laverna Thomas in Fort Collins Colorado. She went to join the Lord in Heaven February 5th, 2020. She was preceded in death by her parents, her husband Delbert Charles Wittenauer, sister Lillian Bickel and two half siblings. She was also preceded in death by the following children: her sons, Lawrence, Gerald and Delbert Wittenauer Jr. and her two daughters Linda McBride and Gloria O’Farrell. She was also preceded in death by her granddaughter Holly McBride and great great grandson, Cooper Johnson. Dorothy, also known as Dot, was born on her parents’ farm in a little white house off of Overland Trail. Dot attended LaPorte Avenue grade school and junior high and also attended Fort Collins High School. While in high school she worked at the CSU Field House serving meals to the military during WWII. Growing up, she loved riding horses with her dad on the property where the CSU weather station is now located, and also on her grandfather’s ranch in Rist Canyon. Dot loved to dance including: swing dancing, The Jitter Bug, The Charleston and tap dancing. She had a tremendous love for music, she played several instruments including: Guitar, Accordion, Piano, Xylophone and Organ. She inspired the love of music and dancing to all of her children and grandchildren. She and her sister played guitar and mandolin and sang live over the radio at age 15. While attending telegraphy school in Spokane, Washington, she met her young Marine, Delbert Wittenauer, and they were married March 18th, 1945 in Bozeman, Montana. Dorothy and her husband moved to Fort Collins, Colorado for two years then moved to Hubbard, Ohio where they raised their family on the farm. They were blessed with 8 children with the first being twins, Jerry Wittenauer and Gloria O’Farrell, Lawrence Wittenauer, Linda McBride, Robert Wittenauer, Delbert Wittenauer Jr., Carol Banks and Dodie Ketterer. They later relocated to Southern California for 9 years. The family came back to the place where Dorothy’s heart never left, Fort Collins, in 1968. She resided in Fort Collins ever since then, enjoying her children, grandchildren, great grandchildren and great great grandchildren. Dorothy has 17 grandchildren, 32 great grandchildren, 12 great great grandchildren and several step grandchildren. Dorothy was a talented musician, homemaker, amazing cook, expert canner and excellent gardener. Dot loved the Colorado mountains and organizing picnics and enjoyed camping. She was a wonderful mother and grandmother to so many and her Love shined through to all. Dorothy’s Celebration of Life will be held at 4:00 pm, March 1st at Kipp and Dodie Ketterers’ Event Center, 5657 Wild Lane, Loveland CO 80538. Flowers may be sent to 6701 W County Rd 18, Loveland Co 80537 by February 28th. Or, a charitable donation may be sent to Children’s Hospital of Denver CO.

Dorothy Irene Thomas Wittenauer was born on June 19th, 1926 to Steven and Laverna Thomas in Fort Collins Colorado. She went to join the Lord in Heaven February 5th, 2020. She was preceded in death by her parents, her husband Delbert Charles... View Obituary & Service Information

The family of Dorothy Wittenauer created this Life Tributes page to make it easy to share your memories.