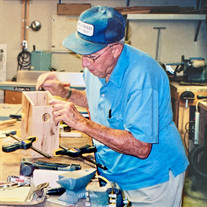 Doyle Vaughn Hall, 88, of Fort Collins, died peacefully Sunday afternoon, January 20, 2019, surrounded by his wife of 67 years and their four children. Doyle was born in 1930 to Lawrence and Inez Hall on their farm in Armel, Colorado, the second of their four children. He was active in 4-H, and graduated high school with a class of twelve. He and Dolores Hill were married in St. Francis, Kansas, on May 6, 1951. Their family grew to include four children, six grandchildren, and fourteen great-grandchildren, who all call him Papa. Doyle’s career included teaching 5th and 6th grades, serving in the Army, and maintaining the extensive grounds of Colorado State University. He was a gifted woodworker and gardener, and enjoyed camping and fishing. In their retirement, he and Dolores spent many happy winters in Arizona. Among his favorite vacations was an Alaskan cruise, and he was a devoted Colorado Rockies and CSU Rams fan. Doyle never met a stranger – he struck up conversations anywhere and everywhere. He was eager to help family and friends with any project – from remodeling a bathroom to building a barn, outworking everyone in the process. He relished the frequent gatherings of his large, close-knit family, including holiday celebrations and trips to the Larimer County fair and rodeo every summer. His remaining family will dearly miss him, including his wife Dolores, sister Charline Fearnot, brother Don, daughters Dayle Towers and Becky Tyler, sons Doug and Ken Hall, grandchildren Jeremy Tyler, Jason Tyler, Dan Hall, Chad Hall, Travis Hall, and Emily Wilson, many cousins, nieces, and nephews, and all their spouses and children. His parents Lawrence and Inez, brother Dwain, and nephew Greg Keller died during his lifetime. Doyle’s family plans to celebrate his life in a private ceremony in the spring.

Doyle Vaughn Hall, 88, of Fort Collins, died peacefully Sunday afternoon, January 20, 2019, surrounded by his wife of 67 years and their four children. Doyle was born in 1930 to Lawrence and Inez Hall on their farm in Armel, Colorado, the second... View Obituary & Service Information

The family of Doyle Vaughn Hall created this Life Tributes page to make it easy to share your memories.