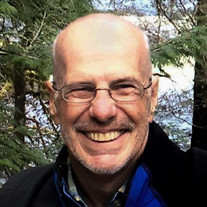 Dr. Jeffrey Gilbert Updegraff passed away peacefully on December 9, 2020, at his home in Fort Collins with his beloved wife of 41 years, Shireen, and his sons, Trevor and Trent, by his side. Jeff was born in 1948 to Betti Laurel Updegraff and David Maule Updegraff. He grew up in White Bear Lake, Minnesota, with his two sisters. As a young man, he was a gifted student and athlete and developed a love of science and nature that carried throughout his life. He attended Saint Paul Academy, the University of Wisconsin at Madison, and moved to Denver in 1970 to attend medical school at the University of Colorado. He began his 35-year career as an emergency physician in Boulder where he met the love of his life, whom he married in 1979, and had his two sons. He moved to Fort Collins in 1984 and spent 30 years serving his community in the Emergency Room at Poudre Valley Hospital. He was a compassionate physician who believed deeply in the equality of all people and dedicated himself to caring for all those whose lives he touched. He pursued his passions with the same dedication and especially loved spending time fly fishing, gardening, hiking and skiing in the Rockies, climbing mountains, and bird hunting with his Labrador retrievers. He was drawn to the rivers and wide-open spaces of the West and loved spending time with his family and many dear friends. Those who knew and loved him will always remember his selfless kindness, integrity, warmth, and bright smile. Jeff is survived by his wife, Shireen Updegraff, of Fort Collins, his sons Trevor Ross Updegraff of Denver and Trent David Updegraff of Maui, Hawaii, his sisters Jan Baulsir of Westminster, CO, and Wendy Updegraff of Fort Collins, his mother-in-law Margaret Millward Blood of Fort Collins, his brothers- and sister-in-law, and many nieces, nephews, and friends near and far. He was preceded in death by his parents, Betti and Dave, and his father-in-law, Archer Kent Blood. Jeff’s family plans to hold a celebration of his life as soon as it is safe to gather. The family wishes to thank those who cared for him throughout his battle with cancer and all who have shared their love and support. In lieu of flowers, Jeff would be humbled by donations to charitable organizations such as the Nature Conservancy, Trout Unlimited, or any humanitarian cause, in honor of his life and living memory. Please re-visit this page for updates on Jeff's celebration of life.

Dr. Jeffrey Gilbert Updegraff passed away peacefully on December 9, 2020, at his home in Fort Collins with his beloved wife of 41 years, Shireen, and his sons, Trevor and Trent, by his side. Jeff was born in 1948 to Betti Laurel Updegraff... View Obituary & Service Information

The family of Dr. Jeffrey Gilbert Updegraff created this Life Tributes page to make it easy to share your memories.