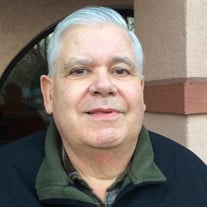 Dr. Michael Gaylord Richard, 72, died on November 21, 2021, at Poudre Valley Hospital, Fort Collins, CO, after a short bout with septic shock unrelated to COVID 19. He was a world-renown microbiologist specializing in the analysis of microbiological upset in wastewater treatment and the application of remedial measures. No memorial service has yet been planned. Michael, known as Dr. Richard or Michael to most, Mike to his siblings, Dad to his children, and Mikey to a special friend and collaborator, was born in Vallejo, CA on October 28, 1949. He was the middle child of Marion Dean and Helen Richard, who long ago predeceased him; his older brother Larry Richard, of Oregon, and his younger sister, Jaime Rofkahr (Ken) of California, survive him. On March 25, 1972, he married Joan Fadenrecht in Hanford, CA and they were only four months short of their 50th anniversary at his death. They had two exceptional children once they moved to Fort Collins CO: Helen M. O’Hare (Pete) now of Ridgewood NY and Samuel A Richard of Fort Collins CO. Michael attended the University of California at Berkeley where he met Joan and earned his A.B. in Field Biology and Ecology (1972), and an M.S. and Ph.D. in Environmental Health Sciences from the School of Public Health (1974/1980). He served as a Postdoctoral Research Fellow in the College of Engineering, Sanitary Engineering and Environmental Health Research Laboratory, at the UC Berkeley, Richmond Field Station CA under Professor David Jenkins (1980-84) before moving to Fort Collins CO as an Assistant Professor of Environmental Health at Colorado State University from 1985-1992. Discerning that he was better suited to practical applications of his love of microbiology and the aquatic environment than to academia, he then went to work as a senior environmental specialist for RBD Engineering Inc and its successor consulting firms, Sear-Brown, and Stantec, from 1992 to 2005. He continued to occasionally lecture in CSU sanitary engineering courses and CSU professional workshops until 2003. In November 2005, he struck out on his own as a private consulting microbiologist, troubleshooter, and trainer (dba Michael Richard Wastewater Microbiology LLC), until his retirement in August 2019. He was a popular lecturer when a CSU faculty member and continued his enjoyable manner of teaching as an accredited trainer for operators and professionals in water and wastewater treatment. Retirement was not as expected due to declining health and chronic pain, not to mention the onset of the COVID pandemic. Fortunately, he spent many years of his earlier life camping and fishing with first his father and brother and later with, Joan, various friends, and family. He earned Life Scout status with the Boy Scouts of America and became a gifted fisherman and skilled outdoorsman in activities such as archery, fly fishing and tying, tidal fishing, spin fishing, backpacking, and camping. He worked several years during grad school for Andre Puyans and Dave Inks where he learned much about the world of fly fishers and rod makers. Ever a patron of flea markets and old-time sporting goods stores, he was an avid collector of vintage fishing rods, knives, and classic archery bows, much to the chagrin of his wife. Michael got his start with microscopes on a hand-me-down scope from his brother and went on to create a catalog of microscope slides of algae for his high-school biology teacher and to win a region-wide science fair with a project on stream ecology. He greatly respected and adhered to the scientific method throughout his life and work. As Dr. Richard, he authored more than 100 papers and technical reports and was an author or co-author of five books on wastewater treatment microbiology including the Manual of the Causes and Control of Activated Sludge Bulking and Foaming, (3rd Edition,1984). He has given more than 150 presentations at meetings nationwide and conducted more than 170 training courses throughout the US and Canada since 1980. Michael provided troubleshooting for any biological wastewater treatment system. Notably, he developed an anaerobic pretreatment design adapted to the cold weather climes of Colorado and Wyoming which was becoming widely used by small municipal lagoon systems. He was also a specialist in MBR systems and helped many such plants get rid of membrane plugging problems. Altogether, Michael was involved in the diagnosis and correction of wastewater treatment microbiology problems for more than 800 cities and 500 industries. Dr. Richard was also the recipient of the Harrison Prescott Eddy Medal, 1988, awarded by the Water Environment Federation for best published research; the National Environmental Training Association’s Environmental Educator of the Year Award, 1998; the Russell Blosser Award from the Technical Association of the Pulp and Paper Industry (TAPPI) in 1999; the Douglas Jones Award from the Pulp and Paper Technical Association of Canada for an eminent contribution to the literature on the improvement of the environment, 2000; and selected as one of the top 100 consultants nationwide by clients, 1996. Michael came especially alive when sharing his love of phase contrast microscopes and the world of microscopic life. One of his goals to was to provide training classes where every participant was able to work individually at an unshared microscope and he met that goal through his company in later life. Michael was full of humor, a loyal friend, a storyteller, a pet and animal lover, and a devoted spouse and father as best he was able in spite of the time and travel demands of his chosen profession. He was a uniquely creative and caring individual who will be remembered for showing love through showering of gifts on, and small acts of kindness and helpfulness for, family and friends.

Dr. Michael Gaylord Richard, 72, died on November 21, 2021, at Poudre Valley Hospital, Fort Collins, CO, after a short bout with septic shock unrelated to COVID 19. He was a world-renown microbiologist specializing in the analysis of microbiological... View Obituary & Service Information

The family of Dr. Michael G. Richard created this Life Tributes page to make it easy to share your memories.