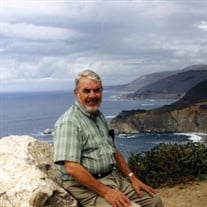 E. James McTighe, 90, of Fort Collins, formerly of Boulder, died August 6, 2020. A retired case officer of the Central Intelligence Agency and freelance writer, he was the author of Roadside History of Colorado. The son of Gilbert Townsend McTighe and Gladys Cummings McTighe, born February 8, 1930 in Mitchell, South Dakota; where he was valedictorian of the 1948 graduating class of Notre Dame High School and an Eagle Scout. A 1952 graduate of the Marquette University School of Journalism, Mr. McTighe was editor-in-chief of the quarterly Marquette Journal. He was a member of Alpha Sigma Nu, the national Jesuit honorary society, Kappa Tau Alpha, national journalism honorary society, and Sigma Delta Chi, national journalism professional fraternity. He was listed in the 1952 Who’s Who in America’s Colleges and Universities. Mr. McTighe received an M.A. in political science from Georgetown University in 1958. A veteran of the United States Air Force, Mr. McTighe served from 1952 to 1955 as an editor and writer in various military assignments in Texas and Washington, D.C. With the CIA he served as an operations officer and analyst specializing in long-range political forecasting. He also served in foreign service capacities in The Netherlands, France and Ecuador. When he retired in 1978 he was a research fellow at the Center for Study of Intelligence where he authored a monograph on the role of human intelligence sources in the verification of strategic arms agreements. Mr. McTighe came to Boulder from Washington, D.C., in 1978. His book Roadside History of Colorado appeared in 1984 and in a revised edition in 1989. A Survival Manual for Consumers was published in 1986. He also contributed a chapter on foreign policy to Addison Wesley’s Civics, Participating in Our Democracy (1990) and co-authored teachers’ guides for Rand-McNally on the Vietnam and Korean wars and international terrorism. His biography appeared in the 22nd edition of Who’s Who in the West. He was active in the lay ministries of St. Martin de Porres Catholic Church in Boulder. He served on the board of directors of Mother House. Mr. McTighe was preceded in death in 1988 by his wife of 35 years, Mary Lucile Dougherty McTighe. Remarried in Boulder on February 9, 1991 to Jean Marie Furth Zirkle, he is survived by his wife; his sons, James, of Fort Collins, Thomas of Broomfield, Patrick of Longmont; his daughters, Michele Kendall of Westminster, Christine Murphy of Lafayette, Margaret Tanner of Lyons, Martha Hall of Berthoud, Catherine Grotheer of Lakewood, and Monica of New York, NY; and his brother Michael of St. Charles, MN; as well as 20 grandchildren, Siobhan, Sean, Michael, Breanne, Shane, Justine, Tierney, Jamie, Darin, Luke, William, Gabriel, Henry, Caitlyn, Zoey, Molly, Tara, Conner, Sophie, and Emma; and 15 great grandchildren. Mass of Christian Burial will be held 9:00 am, August 15, 2020 at St. Elizabeth Ann Seton Catholic Parish in Fort Collins followed by military honors. Interment will take place at noon, Green Mountain Cemetery in Boulder. Contributions in lieu of flowers may be made to Mother House, P.O. Box 19589, Boulder, CO 80308.

E. James McTighe, 90, of Fort Collins, formerly of Boulder, died August 6, 2020. A retired case officer of the Central Intelligence Agency and freelance writer, he was the author of Roadside History of Colorado. The son of Gilbert Townsend... View Obituary & Service Information

The family of E. James "Jim" McTighe created this Life Tributes page to make it easy to share your memories.