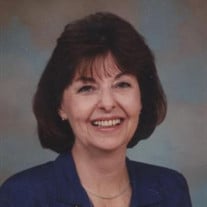 Earlene C. Backes, 83, passed peacefully after a long illness on Wednesday January 8th, 2020. She is survived by her daughter Laura and son-in-law Jon Bard of Fort Collins, CO; son Clarus and daughter-in-law Kira Backes of Auburn, CA; son Michael Backes and daughter-in-law Liane Bennett of Aurora, CO; and brother Dennis Conn of Greenville, SC. Her grandchildren Matthew Bard and Amelia Backes were two of her greatest sources of joy in her life. She was preceded in death by her husband, Clarus Backes Sr., and her parents, Earl and Mary Conn. Earlene was born in Kansas City, Missouri on February 2nd, 1936 to Earl and Mary Conn. She was a graduate of the Marywood School in Evanston, IL, studied at Marquette University in Milwaukee, WI and returned to Evanston to received a degree in Speech Communication in 1959 at Northwestern University. She met Clarus Backes, a journalism major, while at Marquette and they married on November 12, 1960. Clarus’ newspaper and travel writing took Earlene and their children from Chicago to England and Spain, and eventually to the mountains of Colorado, which became Earlene’s favorite home from 1975 up until 2004, when she settled in Fort Collins to be closer to her daughter and grandson. Over the years Earlene brought her grace and natural beauty to modeling, worked in the banking and insurance industries, and turned her connections to the publishing world into a successful Media Liason business, assisting nationally known authors on their book tours to Denver. She loved sharing tales of literary giants and their travel quirks, or the adventures she had getting them to their events on time, and maintained close friendships with many of her clients for years after. Earlene cherished her horse “Toffee” that she had while in Evergreen, along with her dogs “Shadrack”, “Ben”, and “Alamo”. Her garden in the mountains, a day on the golf course, or an afternoon watching horse racing always brought her great joy. Earlene was a pillar of strength and faith for her family, especially after the passing of Clarus, Sr. in 1988. A staunch believer in tradition, she made sure everyone was connected throughout the holidays and family events. Christmas cookies and Easter baskets for all were never missed! Her love of a good Sinatra tune or the warm tones of a Renoir painting gracing her home revealed the elegance and touch of class that she effortlessly embodied, but she could also share down to earth moments with friends and family, playing with her weekly bridge group and watching grandson Matt play drums with his band. An avid reader, she especially loved thrillers by Jonathan Kellerman, Tom Clancy, Lisa Scottoline, Anne Cleves, and countless others. In the end, Earlene’s deep and enduring faith in Christ was her final comfort and helped her reach serenity in her passing. A remembrance of her life will be held at Goes Funeral Care on Wednesday 1/15 from 4-6pm. Funeral service will be held at St Joseph Catholic Church on Thursday 1/16 at 9am with burial to follow at 2pm at Evergreen Memorial Park, Evergreen, CO. Flowers may be sent to Goes Funeral Care and donations may be made in her name to the Denver Rescue Mission.

The family of Earlene C. Backes created this Life Tributes page to make it easy to share your memories.