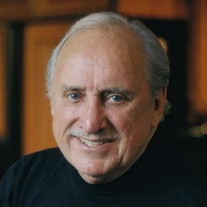 Edmund Joseph Caffrey was born March 8, 1929 to Edmund and Gertrude Caffrey in Babylon, New York. He had one sister, Pat, who pre-deceased him. Ed attended catholic school at Calvert Hall in Baltimore, MD. He enrolled in law school at the University of Baltimore. Ed and his adventurous spirit chose to enlist in the merchant marines and thus began his trips through the North Atlantic and many adventures. When he decided to be on land again, he took a position with Bendix Aviation and was relocated to Casablanca, Morocco. He was later transferred to Germany and Alaska. When he returned to the United States, he traveled to California and tried his luck at screenwriting. He had many good memories and lasting friendships. While in California, his entrepreneurial skills kicked in and he received his real estate license. Real estate agreed with Ed and he opened several real estate schools (Caffrey Real Estate Academy) to help others get their education. Ed and Ann joined the Westlake Village Optimist Club where he loved to help the kids. He became President and the Governor of the Pacific Southwest District throughout Southern California while helping build clubs for youth and participating in braille Olympics, programs for the hearing impaired and the Special Olympics. Those who knew Ed will remember his impressions. His favorites were Bogart, Columbo, the Godfather, and Jimmy Durante. He was often asked to perform at parties. He and his wife Ann worked as the first docents for Ronald Reagan at the Ronald Reagan Presidential Library. Ed authored two books and at the time of his passing was working on a third. He was most recently a member of the Fort Collins Sertoma Club. Ed is survived by his wife of 26 years, Ann Caffrey, and his best friends Brad Burns and Edward Markovich. He also leaves behind his cousin Ed Caffrey and family; his nephew Rob Muller; nieces Pam Muller, Paul and Candy Schultz; and his stepchildren, Mary Currie (Peter), John Baranowski (Susie) and Ed Baranowski (Kerry); and 3 grandchildren, Jonathan, Whitney and Kylie. Services will be held at Redeemer Lutheran Church in Fort Collins, CO on Friday, October 6, 2017 at 11 a.m. In lieu of flowers, the family asks that donations be made to Pathways Hospice, 305 Carpenter Rd, Fort Collins, CO 80525.

Edmund Joseph Caffrey was born March 8, 1929 to Edmund and Gertrude Caffrey in Babylon, New York. He had one sister, Pat, who pre-deceased him. Ed attended catholic school at Calvert Hall in Baltimore, MD. He enrolled in law school at the University... View Obituary & Service Information

The family of Edmund Joseph Caffrey created this Life Tributes page to make it easy to share your memories.

Edmund Joseph Caffrey was born March 8, 1929 to Edmund and Gertrude...