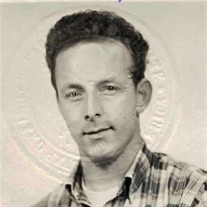 Edwin Jackson, age 76, passed away September 14 at UC Health Medical Center after a battle with bladder cancer. “Ed” was born in Blackpool, England on July 5, 1941. As a young man, he enlisted with the Royal British Airforce and served from 1959 to 1962. In 1962, Ed moved to the United States and became a naturalized citizen by enlisting in the Unites States Airforce, where he served as an aircraft mechanic. He went on missions in Turkey, the Congo, and served in the United States Civilian Army in Vietnam. After his military career, Ed became a police officer and worked for Colorado State University from 1980 to 1992, when he retired. Although he was “officially” retired, Ed continued to work numerous other jobs. He worked as a bus driver for Parkwood Estates and for the Dial-a-ride program, where he got to interact with elderly folks and people with special needs. He also worked for Securitas as a security guard. When he could no longer work due to his illness, Ed continued to interact with the public. He enjoyed going up to people, asking their names, and discussing what their nationality was. He was very good at imitating foreign accents and his best ones were Pakistani, German, Scottish, and Irish. He is survived by his wife of 37 years, Andrea, and two daughters, Lindsay and Ashley. The family would like to thank all the wonderful health care professionals from UC Health, who cared for him during these last few years. Graveside service including military honors will be held at 1:15 pm on Monday, September 25th at Fort Logan National Cemetery, staging area C. Arrival at the staging area at 1:00 pm is highly suggested.

Edwin Jackson, age 76, passed away September 14 at UC Health Medical Center after a battle with bladder cancer. &#8220;Ed&#8221; was born in Blackpool, England on July 5, 1941. As a young man, he enlisted with the Royal British Airforce and... View Obituary & Service Information

The family of Edwin Anton Jackson created this Life Tributes page to make it easy to share your memories.