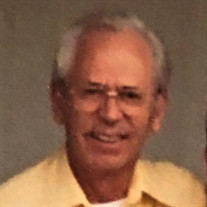 Edwin was Born March 5, 1932 at Lustre, Montana. He died Sunday December 13, 2020 at age 88. Ed was the fourth child and third son born to Pete and Margret Peters. He was followed by five more sisters and one brother. He grew up on a farm at Larslan, Montana. He attended Sunny Side elementary school and graduated from the Lustre Bible Academy. When he was a young man he liked cars. He got that from dad. His nicest car was a new 1953 88 Oldsmobile two door hard top. I was eight years younger than Ed but I rode along a lot with him. When Dad bought the Swanson place, Ed and LeVern each bought a half section of land. We always farmed Ed’s and Le Vern’s half sections together. Ed gave his heart to the Lord when he was about 20 at the Larslan Mennonite Brethren church which was our home church. He followed Le Vern and Lloyd to the Prairie Bible Institute (Alberta Canada), and was followed by me and Marian and Norma. Ed and I were room mates at Prairie during my first year and his last year. He graduated from Prairie in 1959. After graduating from Prairie he serve for a while as a pastor in Griffin, Saskatchewan. Then he worked at Zerbe’s or a few years. He moved to California and found his place in life by serving with Gospel Recordings, a missionary organization. He served there for many years until he was old. A colleague of his said he could fix anything. He did not join the mission to be their fix it man but became that by necessity. He met and married Dorothy in 1983. She was a beautiful widow with five grown children. He and Dorothy flew me from Chicago to Los Angeles to be the best man at their wedding. He picked me up at the airport on the morning of their wedding, and as we drove to Dorothy’s nice house, Ed seemed unsure if he was doing the right thing. I thought, This is no time to be unsure so I did what I could to assure him he was making a good move. It proved to be a good move. Ed was a bold witness for Jesus, but not always a culturally refined witness. Ed and Dorothy moved from Los Angeles and lived in Pahrump, NV for some years. Ed was preceded to heaven by his wife Dorothy of cancer in 2007. At that time he moved from Los Angeles, California to Loveland, Colorado to live out the rest of his life. He was preceded to heaven from his own immediate family by Lois, who died as a baby, Dad, Mom, LeVern, Irma, Lloyd and Marjory. Ed preceded to heaven Marian (Alberta), Carolyn (Arizona), Bob (Alberta), Norma (Oregon) and Ella (Colorado). I do not say “to heaven” lightly as if everyone goes to heaven, but we had the great good fortune of growing up in a Christian family where Dad read the Bible to us each morning before he prayed at Breakfast. We attended Morning and evening church services on Sunday and some attended the prayer meeting on Wednesday evening. All of us became Christians and to some extent or other served the Lord. We were far from perfect, but have many reasons for which to be thankful. We, Ed’s living siblings, would like to thank Ella for all the thoughtful things she did for Ed. She was the only one who lived close to where Ed spent his final years. She spent time with him just before he passed away. She said concerning her last visit with him on Sunday morning, “I feel I have GOOD peace with his passing because I think I did what I felt was what Jesus would do. I prayed for him to feel Jesus presence and love. To know he was righteous because the Bible says we are if we are believers - prayed he would know his sins are forgiven because Christ died to forgive and cover sin. I said the Lords prayer. Quoted Psalm 23. Sang, Grace Grace God’s Grace. Told him I could see how hard he was struggling to breath, and it would be okay to go see Jesus. I told him I loved him and said, goodbye and I would see him in heaven.” Ella left and Ed passed away before she got home. Ella and Ray arranged for the cremation and ordered a gravestone. Her plan is to transport him later to the Lustre Mennonite Brethren church grave yard in Montana to be buried where his sister Lois is buried. Lois died as an infant. Ella gave me the privilege of writing the obituary to be posted on line. We, Ed’s living siblings, would also like to thank Ed’s care givers for their attention to his needs at Sierra Vista in Colorado. --Bob Peters From Norma. “I remember mother watching Ed walk across the yard on the farm home. She said, “Ed always walks so straight.” I don’t know why, but I never forgot that. I also remember all 4 boys, standing in the kitchen & laughing and arguing about religion. They were having a good time.”

Edwin was Born March 5, 1932 at Lustre, Montana. He died Sunday December 13, 2020 at age 88. Ed was the fourth child and third son born to Pete and Margret Peters. He was followed by five more sisters and one brother. He grew up on a farm at... View Obituary & Service Information

The family of Edwin Francis Peters created this Life Tributes page to make it easy to share your memories.