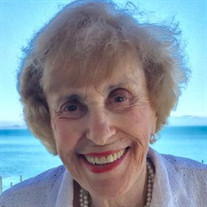 Eleanor Hall Knight (“Ellie”) was born in New York City on Feb. 1, 1925. She grew up in Westchester County in New York, and attended Indiana University, but transferred to Columbia University School of Business Administration where she received her B.S. degree in 1946. She later did graduate and post-graduate work at the University of Minnesota in the area of Education. She met her husband of 65 years, Herbert, at Columbia where he earned a MBA. She passed away on January 4, 2017 at Pathways Hospice in Loveland, CO. Ellie was an elementary and special education teacher in Riverside, CA, and later became the Director of Reading for the Chaska (MN) School District and was in that position for 17 years. During that time frame, she was a presenter at the International Reading Association Conventions as well as at local Minnesota workshops in reading instruction. She was the author of KISP (Knight Individualized Spelling Program), a widely used phonetics spelling program, which addressed the needs of students in grades 4-12 in the areas of reading and spelling. Ellie was an avid swimmer and bridge player. She was also active in Junior League and was a 50 year member of PEO. She belonged to the Community Presbyterian Church of Rancho Bernardo, CA. Although Ellie excelled at her profession, she did her very best work as the matriarch of her family. She was most proud of those loved ones who survive her: her two sons, Paul (Diane) and John (Whitney), her four grandchildren, Bradford and David Knight, Jackie Knight Paul (Jeremy) and Lauren Knight (Mikkel Conradi) and her great-grandson, Julian Conradi. She is also survived by a loving sister, Marny Hall (Susan Kennedy). A Celebration of Life will be held at The Lodge at MacKenzie Place, 4751 Pleasant Oak Dr, Fort Collins, CO 80525 on January 28 at 2 p.m. Memorial contributions may be made in her name to the Friends of the Rancho Bernardo Public Library, 17110 Bernardo Center Drive, San Diego, CA 92128.

Eleanor Hall Knight (&#8220;Ellie&#8221;) was born in New York City on Feb. 1, 1925. She grew up in Westchester County in New York, and attended Indiana University, but transferred to Columbia University School of Business Administration where... View Obituary & Service Information

The family of Eleanor Hall Knight created this Life Tributes page to make it easy to share your memories.