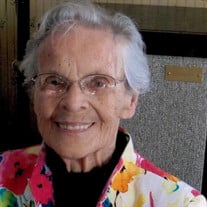 Elizabeth Breese Hinde, 94, of Ft. Collins, passed away peacefully at Poudre Valley Hospital on the evening of December 16, 2016 surrounded by her family. Breese (no one called her “Elizabeth!”) was born to Beth and Lew Jones April 16, 1922 in Minneapolis, Minnesota. She was their only child. At age 7, she was stricken with polio. Her parents chose a controversial treatment pioneered by Sister Elizabeth Kenny, which probably prevented any later paralysis. The family moved to Kansas City where Breese attended elementary and high school. She attended Park College in Parkville, Missouri, where she met Tom Hinde, her future husband. Breese enrolled in Park College for two years, then transferred to Washington University in St. Louis, where she earned a Bachelor’s degree in social work. She was awarded a Danforth Scholarship for further studies at the University of Texas. Breese and Tom married on September 1, 1944, after Tom’s return from military service in World War II. They moved to Topeka, Kansas, where Tom taught high school English, and Breese stayed at home with their children (Liz and Chris). During the summers, she and Tom worked at the YMCA camp Wichita, Kansas where Breese was the office manager. The family moved to Denver in 1956. Breese worked as the church secretary for the United Presbyterian Church in Englewood. She was active in many church activities including Mariners, Presbyterian Women, Church Session, youth group leader, Sunday School teacher and choir. Later Breese worked at Loretta Heights College in the Department of Admissions. Eventually she accepted the position of Executive Assistant to the Loretta Heights President. Breese and Tom also worked summers at Boys’ Trail’s End - Cheley Camps near Estes Park. Once again she worked as the office manager. Tom died in Denver, in 1989. In 2002, Breese moved to Ft. Collins to be closer to family. She joined Plymouth Congregational Church. She volunteered for the Homeless Prevention Initiative (HPI) and was a faithful member of the Volunteers of America “Mail Brigade” which assists local non-profits with their mailings. She was an avid member of her book club and a Thursday ‘Dummy Rummy’ group. She also tutored international students in a Colorado State University ESL program. It must be said that upon her initial introduction to someone it took only minutes for her to learn their life stories. She was an exemplar of acceptance of all, and she found her faith grounded in the Open and Affirming stance at Plymouth. She prayed for peace, hope, and justice for all. Breese was preceded in death by her parents and husband, Tom. She is survived by two daughters, Liz (Jack) McGrew and Chris Gloor, both of Ft. Collins; four grandchildren – Megan (Zach) Campain, Aaron (Ashley) McGrew, Marnie (Kipp) Chambers, and Brock Gloor; and four great grandchildren – Griffin and Macklyn Campain, Charlotte McGrew, and Calder Chambers. A service celebrating Breese’s life will be held at Plymouth Congregational Church on January 21, 2017 at 1:30 pm. Also, please leave condolences and share memories of Breese on the Goes site. In lieu of flowers, please make a donation to the Breese Hinde Memorial Fund c/o Goes Funeral Care, 3665 Canal Drive, #E, Fort Collins, CO 80524. Donations will go to support the efforts of HPI and the local Salvation Army.

Elizabeth Breese Hinde, 94, of Ft. Collins, passed away peacefully at Poudre Valley Hospital on the evening of December 16, 2016 surrounded by her family. Breese (no one called her &#8220;Elizabeth!&#8221;) was born to Beth and Lew Jones April... View Obituary & Service Information

The family of Elizabeth Breese Hinde created this Life Tributes page to make it easy to share your memories.