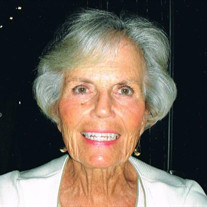 The lovely and elegant lady, Elizabeth (Lisa) Burgess Sullivan, died peacefully of ovarian cancer on March 4, 2018, in Ft. Collins, Colorado, where she had resided since 1965. Born October 18, 1935, in Chicago, Illinois, Lisa was the only daughter of Dr. John Paul and Ethel Burgess, both preceding her in death. Two brothers, Dr. John Warren and Robert William also died earlier. Lisa was raised in Rock Island, Illinois, graduating from Rock Island High School in 1953. She then received her Bachelor of Science degree from the University of Colorado in 1957. She was a member of Pi Beta Phi sorority and several honorary organizations. Lisa enjoyed 59 wonderful years of marriage to John-David Sullivan, whom she met at CU in 1956 while both were students. Following graduation, she taught junior high in Hillsdale, Illinois, for one year. After marrying in 1958, she taught in the Denver Public Schools for two years before starting a family. Lisa was a member of the Denver Junior League before moving to Fort Collins. She served as president of the Ft. Collins Childrens’ Theater and the Gustaveson Gallery Board at CSU. She was an accomplished seamstress and also taught needlepoint for several years before working as a travel consultant for ten years. She loved playing golf. Lisa’s life is best described as vibrant and rich, filled with love, joy, happiness, intelligence and kindness. Times spent with her husband and their two sons were special. She will be greatly missed and warmly remembered. Lisa is survived by her husband John-David; her son David and Laurie of Dublin, Ireland; and her son Douglas and Jolina of Frisco, Colorado. A memorial service will be held at St. Lukes Episcopal Church, 2000 Stover, Ft. Collins at 2:00PM on Saturday, April 14, 2018. Honorary pallbearer: Mia Olind In lieu of flowers, the family requests that memorial contributions be made to: CASA of Larimer Co., YMCA Camp Manito Wish, Pi Beta Phi Foundation, The Rotary Club Legacy Fund, or whatever charity the giver feels more comfortable with: In care of Goes Funeral Care, Ft. Collins, CO

The lovely and elegant lady, Elizabeth (Lisa) Burgess Sullivan, died peacefully of ovarian cancer on March 4, 2018, in Ft. Collins, Colorado, where she had resided since 1965. Born October 18, 1935, in Chicago, Illinois, Lisa was the only... View Obituary & Service Information

The family of Elizabeth Ann Burgess Sullivan created this Life Tributes page to make it easy to share your memories.