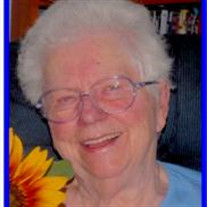 Emily J. Nowakowski, 91 of Ft. Collins, Colorado died March 20, 2017 at Ft. Collins Good Samaritan Village. Recitation of the Holy Rosary will be held at 6:00 PM Thursday, March 23, 2017 at Goes Funeral Care, 3665 Canal Dr., #E, Ft. Collins. Mass of Christian Burial will be celebrated at 9:30 AM, Friday at St. Joseph Catholic Church, 300 West Mountain Ave., Ft. Collins. A reception will follow the Mass with cremation as the choice of final disposition. Emily Patros was born in Chicago in October of 1925 to Edward and Jeannette Majewski. She grew up on the South-side of Chicago and graduated from Fenger High School in Chicago. She worked as a telephone operator out of high school and married Alex Adzgowski with whom she had a son, Richard. They owned and operated a neighborhood bar on the South-side of Chicago. After that marriage ended in divorce, Emily went to work as a bank teller for A. J. Smith Savings and Loan. She soon married Stanley Nowakowski, Stanley died about 18 years later. Along the way, Emily was very active in her church; first, at St. Catherine of Genoa, next, St. Salomea, then St. Elizabeth Ann Seton, all in Chicago. When she moved to Ft. Collins in 1990, she became active at St. Joseph Catholic Parish. She was active in the legion of Mary and the Birthday Club. She was also active in the Aspen Club and went to lunch nearly every day at the Ever Open Café. Emily had a great sense of humor and was always warm and kind and inviting to anyone she met. She is survived by her son, Rich Adzgowski; several nieces and nephews and her grand dog Bohdi. She was preceded in death by her first husband, Alex “Duke” Adzgowski; her second husband, Stanley Nowakowski; her sister, Irene Malkowski; and her brother, Edward Patros. Please consider making donations to Good Samaritan Village, 508 W Trilby Rd, Fort Collins, CO 80525.

The family of Emily Jeannette Nowakowski created this Life Tributes page to make it easy to share your memories.