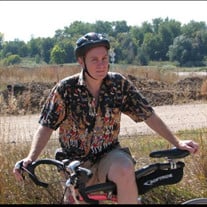 Eric Lee Babbitt, father, husband, and friend to many, passed away in Fort Collins, CO on December 19, 2017, from complications in his long battle with cancer. He was 56 years old. Eric earned his Mechanical Engineering degree from Colorado State University and was employed by the Burris Company at the time of his death. He was an engineer, an explorer, a story teller, a mentor, and a competitive foosball player, splitting his time among the work he loved; any trail, campground, and waterway he could find; his library; and the foosball table. Each of these loves he passed down to his sons. Then there were the bikes. He biked for many miles across many years, and in so doing he met his wife and his closest friends. This too he passed down. Eric was an avid outdoorsman, who loved seeing different landscapes and countries and the peoples who lived on them. For any hike, bicycle ride, or fishing venture you would be hard-pressed to find a better companion. His love of books and his understanding of world affairs also enhanced every venture with him. For those who shared any trail with him he will be greatly missed. He will also be missed by the many people he helped in myriad ways. Eric is survived by his parents, Alvin E. & Dorothy M. Babbitt; his wife, Patricia K. Babbitt, and his sons Knaight & Nolan Babbitt. In addition, he is survived by his 3 siblings Michael J Babbitt (wife, Kathleen), Curtis W. Babbitt (wife, Cindy), & Vicki New (husband, Brian); his Aunts Dot Babbitt, DeDee Donnell, Nicki Donnell, Ramona Donnell, and Patricia Donnell; his Uncle Jack Donnell and numerous nephews, nieces and cousins. He is preceded in death by grandparents Alvin & Opal Babbitt and Howard and Hazel Donnell as well as Uncles Kenneth Babbitt, George Babbitt, Ralph (Bill) Donnell, Phil Donnell, and Melvin Moore, Aunts Retha Babbitt and Sandra Moore, and cousin Andrea Donnell. In lieu of flowers, Eric would appreciate any donations to be made to the FISTULA FOUNDATION, 1922 The Alemeda, Ste 302, San Jose, CA 95126.

Eric Lee Babbitt, father, husband, and friend to many, passed away in Fort Collins, CO on December 19, 2017, from complications in his long battle with cancer. He was 56 years old. Eric earned his Mechanical Engineering degree from Colorado... View Obituary & Service Information

The family of Eric Lee Babbitt created this Life Tributes page to make it easy to share your memories.

Eric Lee Babbitt, father, husband, and friend to many, passed...