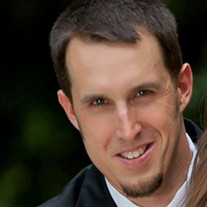 Eric T. Dimmick of Fort Collins, CO, formerly of Stoneham, MA passed away on April 1, 2017 after a lengthy illness. He was born in Stoneham, MA on May 31, 1972, the son of Howard T. and Carole A. Dimmick. Eric was educated in the Stoneham, MA schools and received a Bachelor’s Degree in Construction Management from Roger Williams University, Bristol, R.I. in 1994. He moved to Fort Collins for graduate studies in his field at Colorado State University in 1996. Eric was employed by Adolfson & Peterson Construction Co., Denver, CO for 10 years as a Senior Pre-Construction Manager with specialties in Medical and Educational facilities. In recognition of his contributions to Adolfson and Peterson, the company has established an endowed scholarship for construction students in Eric’s name at Colorado State University. Eric married Angela Janel Marolf at St. John’s Lutheran Church in Fort Collins on August 6, 2011. They enjoyed travel and made multiple international trips in their years together. Eric leaves behind his wife, Dr. Angela J. Marolf; his parents, Howard T. and Carole A. Dimmick; his mother-in-law Janel Marolf; his grandmother, Claire M. Budzinski; an uncle, John P. Budzinski, and cousins, Brian Budzinski and Jill Colby. Eric earned his Eagle Scout in Troop 513 in Stoneham, MA. He was also a representative of the Minuteman Council at the World Jamboree in Sydney, Australia in 1987-1988 and at the National Jamboree at Camp AP Hill in Virginia in 1989. He was also a member of the Order of the Arrow. Eric was an avid skier, bicyclist and RC Car enthusiast who enjoyed many seasons skiing and cycling in the Colorado Mountains. His hobbies were RC cars and especially woodworking with so many of his projects being given away as gifts. A Memorial Service will be held at St. John’s Lutheran Church, 306 East Elizabeth St, Fort Collins on Friday April 7, 2017 at 11:00 AM. In lieu of flowers contributions may be made to the Eric T. Dimmick Memorial Scholarship at Stoneham High School, 149 Franklin St., Stoneham, MA 02180. To share a memory of Eric or leave a special condolence message to his family please visit http://www.goesfuneralcare.com/obituaries/

Eric T. Dimmick of Fort Collins, CO, formerly of Stoneham, MA passed away on April 1, 2017 after a lengthy illness. He was born in Stoneham, MA on May 31, 1972, the son of Howard T. and Carole A. Dimmick. Eric was educated in the Stoneham,... View Obituary & Service Information

The family of Eric Todd Dimmick created this Life Tributes page to make it easy to share your memories.