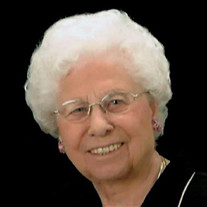 Erma Fayrene Tettenhorst, age 100 of Johnstown, CO, formerly of Fort Collins, CO died Sunday, June 11, 2017 in Fort Collins. Her funeral service will be held at 11:00 AM Wednesday, June 14, 2017 at Foothills Assembly of God, 305 West Swallow, Ft. Collins. Interment will be at 10:00 AM Saturday, June 17th at Sunset Memorial Gardens, Machesney Park, IL. Please wear blue in her honor, Erma’s favorite color. Erma Fayrene Means was born March 6, 1917 in Welch, Oklahoma to Andrew and Lillie Means. She married Roy Walter Tettenhorst on August 27th, 1937 in Aurora, MO. They settled in Rockford, IL in 1953 and lived there for nearly 40 years. She was a Girl Scout Den Mother, enjoyed playing golf and bridge and bowling. Roy died in 1986 and Erma moved to Fort Collins in 1992 to be nearer to her daughter and son-in-law. She lived for several years at Oakbrook II and enjoyed playing cards and dominos and watching Broncos play football. Through the course of her lifetime, Erma saw many changes from horseless carriages to space travel to handheld computers. A remarkable woman who always had an upbeat attitude and a smile. Erma is survived by her daughter and son-in-law, Connie and Steve Peterson of Johnstown; grandson, Mark Peterson and his wife, Ali Gardner; and her sister, Ruby Snider. Ruby is now the last surviving of 10 siblings. Erma’s family asks that any memorial donations please be made to Pathways Hospice in Care of Goes Funeral Care, 3665 Canal Drive, Ste. E, Ft. Collins, CO 80524.

The family of Erma Tettenhorst created this Life Tributes page to make it easy to share your memories.