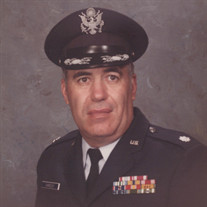 Lt. Colonel Eugene LaVar Barbezat of Fort Collins, Colorado passed away on Thursday, August 29, 2019. Gene was born to Fred Barbezat and Madge Gibbons in St. Johns, Arizona. He spent his early childhood there and on Red Hill in Oahu, Hawaii, where he witnessed the bombing of Pearl Harbor. Soon after the war, his family moved to Meridian, Idaho. He lost his father when he was 11, and this loss deeply shadowed his life, driving a strong sense of duty to family and work, motivated from the wish to provide a legacy for his father. Gene graduated from Meridian High School in 1954, and was active in sports and his LDS faith. He put himself through college at Brigham Young University, where he participated in Air Force ROTC, was a leader in school social clubs and charitable groups, and nearly went professional in boxing until a head injury sidelined his career. To earn the money needed to finish his schooling he joined the Army in 1958, going through basic training at Fort Carson in Colorado, and serving three years as a field medic in Tucson, Arizona and at Landstuhl Regional Medical Center in Kaiserslautern, Germany before returning to BYU. Upon graduating in 1963 with a BS in Sociology, Gene served as a probation officer from 1963-1966, first in Boise, Idaho and then as a juvenile probation officer in Ogden, Utah. In 1966 he was admitted to the U.S. Air Force’s Officer Training School at Lowry AFB in Denver, Colorado and graduated with distinction. He served in the U.S. Air Force for the next 19 years as an Intelligence Officer, retiring with the rank of Lieutenant Colonel in 1985. His service included assignments with Task Force Alpha during the Vietnam War, in Saigon as well as Nakom Phenom and Udon in Thailand; the Intelligence Research Center at USAF in Europe HQ, Wiesbaden, Germany; positions as Human Intelligence Program Manager and Indications and Warning Team Chief at Patch Barracks, U.S. European Command HQ (EUCOM), in Stuttgart, Germany; and two assignments under DIA command in Washington D.C. After the success of the Indications and Warning program at EUCOM he was tapped by General Huyser, Commander of Military Airlift Command, to set up the same program at MAC HQ, Scott AF Base in Illinois and serve as its Director. Gene earned his MA in International Relations in 1980 through a military based branch of the University of Southern California and he was awarded numerous medals during his military career. These included the Defense Meritorious Service Medal with 2 oak leafs, the Meritorious Service Medal, the Air Force Outstanding Unit Award with 1 oak leaf, and the Joint Service and Air Force Commendation Medals. Gene met his wife, Karen, in Wiesbaden, Germany in 1968, where she was working for the Department of Defense as an elementary school teacher. They married in Switzerland in December, 1970 and their daughter was born the following year in Wiesbaden. They next lived in Alexandria, Virginia while Gene worked at the Washington Navy Yard in downtown D.C. Their son was born during this time at Fort Belvoir and the following year the family enjoyed celebrating the Nation’s bicentennial activities in Washington D.C. In 1977 Gene was stationed in Stuttgart, Germany, and the family spent weekends and vacations traveling Europe. They lived in Belleville, Illinois upon returning to the U.S. in 1980, while Gene worked at Scott Air Force Base; and his final year of active duty was spent away from the family at the Pentagon. After his retirement from the Air Force, the family moved to Denver, Colorado where Gene worked for Martin Marietta as a systems engineer and analyst, and later for various tech companies as a technical writer and contractor. He eventually settled with Karen in Fort Collins, where they have lived for the past twenty five years. Throughout his career and after his retirement, Gene was actively involved in volunteer work and charities. For many years he worked with the Boy Scouts, serving as a den leader, a scout master (for Troop 686 in Littleton) and a round table commissioner in the Denver Area Council; and as a unit and assistant district commissioner in the Longs Peak Council. He also donated to and was active in Veterans organizations including the VA and the American Legion. He was a member of VFW Post 1781. Other volunteer work included time with various schools in Fort Collins, Toys for Tots, and as a volunteer and counselor for homeless youth at Urban Peak in Denver during the late 90’s. Gene is survived by his wife of 49 years, Karen; two children, Michele and Sean; a granddaughter, Naia, two step brothers Dave and Bill Kindall, and his rescue dog, Chewy the Shih Tzu. Gene was preceded in death by his parents, his brother, Don Barbezat; two sisters, KeAloha “Kay” (Barbezat) Wright and Linda (Kindall) Lesley; his step father, Ralph Kindall; and two step brothers, Jack and Jim Kindall. The family would like to express thanks and their deep appreciation to Gene’s doctors, nurses, aids, and therapists, as well as the staff at The Suites for their respect, kindness, and affection toward Gene over the last 2½ years. Graveside services will be held at Arlington National Cemetery on December 5th.

The family of Eugene LaVar Barbezat created this Life Tributes page to make it easy to share your memories.