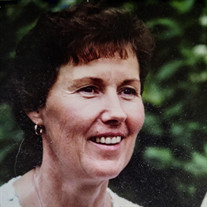 Frances Louise Nash passed away January 30, 2021 at her home in Johnstown at the age of 87. She was born in Fairfax, Oklahoma on June 16, 1933 to Cecil L. Wells and Marguerite M. Ellsworth Wells. The family moved to the Longmont area in 1942. She often rode her horse to the one room school house where she attended elementary school. She spent her summers, during high school, working at Cheley Camp in Estes Park. It was there that she met and dated her future husband Merle. She graduated from Longmont High School in 1951 and on August 6, 1951 she married Merle W. Nash in Denver, Colorado. They had three children, Terry, Allen “Budge”, and Renee. In 1956 they moved to Steamboat Springs, Colorado where the family enjoyed a life of outdoor sports such as skiing, fishing, camping, hiking, and swimming. Many of the family’s vacations were pack trips on horses up in the Mt. Zirkel Wilderness Area. Frances made sure that every member of the family had all they needed for the seven to ten days they spent in the wilderness; camping, fishing, and hiking. She spent much of her time driving her children to all their lessons and activities as well as being a Brownie Scout, Cub Scout, and 4-H leader. She worked for the Steamboat Springs School District as a librarian and teacher’s aide, often helping some Vietnamese refugees learn to read. Later she worked in retail at various stores in Steamboat. Frances and Merle moved to Johnstown, Colorado in 2010 to be closer to their kids. She was preceded in death by her parents; Cecil and Marguerite, husband Merle, sisters; Joy, Jo Frankie, Tony and brothers; Stan, Cecil Jr, and Lanny. She is survived by her children; Terry (Scott) Larrick, Allen Nash, and Renee (Joe) Sorholus, grandchildren; Jerome (Cindy Chadwick) Nash, Tana Nash, Travis (Ann) Nash, Trever (Shelby) Nash, and Shawn Nash, great grandchildren; Dane, Kensley and Kennedy, brother Randy (Vicky) Wells, sister-in-law Noreen (Barry)Johnson, and brother-in-law Fred Finley, as well as several nieces and nephews. It was Frances’s wish to not have any services. Any memorial contributions can be made to Banner Health Hospice of Northern Colorado in care of Julie Miller at 5628 W. 19th St., Greeley, CO 80634.

Frances Louise Nash passed away January 30, 2021 at her home in Johnstown at the age of 87. She was born in Fairfax, Oklahoma on June 16, 1933 to Cecil L. Wells and Marguerite M. Ellsworth Wells. The family moved to the Longmont area in 1942.... View Obituary & Service Information

The family of Frances Nash created this Life Tributes page to make it easy to share your memories.