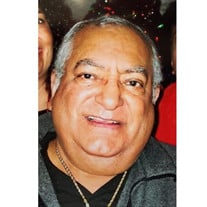 Frank Aguirre, 82, passed into eternal life on March 28th, 2020. Born in October, 1937 to Francisco and Beatrice Aguirre, Frank married the love of his life, Trinnie Ciddio on August 26th, 1959. Trinnie and Frank had four children, Roberta (Dan) Cole, Linda (Tom) Riggs, Jackie (Mike) Riba, and Jason (Sandy) Aguirre. A hard worker all of his life, Frank retired from Anheuser-Busch several years ago but continued to be a pain in the ass to all who knew him. He loved fiercely and was a devoted husband, father, grandfather, and great-grandfather. He had a wicked sense of humor and loved to bust your chops almost as much as he loved laughing at life in general. He loved to tell stories of his exploits, and they grew ever more grand with each telling! One thing that never changed, however, was the lesson or the meaning behind each story. Whether it was a teaching moment or just a story to be shared, it was told with heart and love and, when appropriate, humor. He raised his children to be independent and able to stand on their own, no matter the circumstances. His love was true, tough, and undeniable. He spent the bulk of his life living in and around Fort Collins and loved taking care of his yard and his gardens almost as much as he loved his grandkids and great grandkids. He had a loud, booming voice and an unforgettable laugh. If you were ever in trouble with Frank that voice could sound like thunder, and there was never any doubt. There was also never any doubt that you were loved by him as well. One thing that will never be disputed about Frank is the fact that he was NEVER wrong!! Whether he was right or not, he was never wrong. Once he had his mind made up about something there was no changing it. Something as trivial as facts and truth couldn’t sway his opinion about things once his mind was set, and to try to change it was the absolute definition of futility. Just try to convince him that he was ever wrong about anything….go ahead…I dare you! However…something that I learned as his first son-in-law and frequent vacation companion was this. He DID know when he was wrong or if he made a mistake, and he would very quietly go about correcting his mistake (notice I didn’t say mistakes, plural) and never say another word about it. You could argue with the man and it could get ugly at times, but once the argument was over it was back to life as usual. He wasn’t afraid to apologize when necessary and he was quick to forgive. At his core, Frank was a deeply devoted and loving person and you never had reason to doubt where you stood with him. There was no gray; just black and white. He was preceded in death by his parents and sisters Nena, Lupe, Beatrice and Delores, and by one brother, Hank. Also, one son-in-law, Mike Riba, and one great granddaughter, Kylie. Frank is survived by his wife of more than 60 years, Trinnie Aguirre and his children listed previously. Also surviving are brothers Augustine, Fedrico, Jessie, and Armando, as well as grandchildren Aubrie McGee (spouse Justin, children Jaxson, A’Miyah, Maclen and Walker), Kirsti Aguilar (spouse Robert and daughter Miracle), Dalton (partner Bri, children Macie and Thorin ), Steven, Daniel (spouse Hailey, children Carter and Gabby), and Matthew. Frank loved and cherished each and every family member equally, including his many, many nieces and nephews from coast to coast!

The family of Frank Aguirre created this Life Tributes page to make it easy to share your memories.