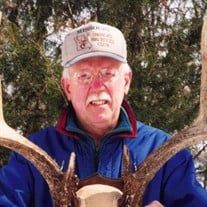 Frank L. Orzell, 86 of Fort Collins, CO, formerly of Fayette and St. Louis, MO died February 9, 2020 at his home. A memorial mass will be held at 11:00 AM Tuesday, February 18, 2020 at St. John 23rd Catholic Church, 1220 University Ave., Ft. Collins. A reception will follow. Interment will be held privately, later, at Grandview Cemetery, also in Ft. Collins. Frank Lawrence Orzell was born and raised in St. Louis, MO to Walter and Veronica Orzell. He served in the Army during the Korean War. In 1956 he married JoAnn Myers at St. Philip Neri Catholic Church in St. Louis. They were blessed with two sons, Steve and Mike. During his working career he was a meat cutter in the grocery business. His passions included deer hunting, bass fishing and spending time outdoors with his loved ones. Frank was also an enthusiastic Indy Racing Car fan. Anyone who ever met Frank would fondly recall his warm personality and great sense of humor. After his retirement he enjoyed spending time with his “country” grandchildren on his property in Fayette, MO, until moving to Ft. Collins in 2015. Frank is survived by his wife, JoAnn; two sons, Steve Orzell of Sebring, FL, and Mike (Pam) Orzell of Ft. Collins; his sister, Vivian Healy of St. Louis; dear friends, Jim (Susan) Groene, and their children Stephen (Sarah) Groene, Michele (Tyler) Hannigan, and Michael Groene (Mercedes Adams-Kloepfer); as well as two great-grandchildren, Kylie and Emmett Groene. His family requests memorial donations be made to Parkinson.org or to Pathways Hospice.

The family of Frank Lawrence Orzell created this Life Tributes page to make it easy to share your memories.