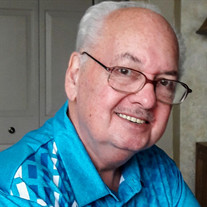 Gary Wayne Cooper was born September 14, 1942 in Cincinnati, Ohio. On July 30, 2019, at 76 years of age, his lengthy battle with Alzheimer’s ended in Fort Collins, Colorado; His home away from home since 1994. He was a son to Charles and Geneva Cooper, and a brother to Bee Cooper (deceased), Buck Cooper and Zane Cooper, all of Cincinnati, Ohio. He is survived by his wife Ronda Lynn (Newkirk), his children Cary Wayne, Marsetta Lynn, Michael James, Gary Dale and Dennis Charles. He was grandfather to 13, and great grandfather to five. He left behind countless lifelong friends. He worked as a foreman at Asplundh Tree Service for many years. After that, he used his skills to maintain and beautify many different properties as grounds keeper and maintenance manager in the Cincinnati area and then in the Fort Collins area. In 1970, Gary met and married Ronda Lynn Newkirk. Gary and Ronda were baptized as Jehovah’s Witnesses in 1975 and their lives changed. He served as an Elder for many years in the Terry Lake Congregation. Gary loved serving Jehovah God. Being a servant of Jehovah and sharing his faith with others in the community meant everything to him. His faith was his life, and his life was his faith. Gary was very intelligent, hard-working, punctual and kind. Many of the simple things in life brought him much joy. He enjoyed being in the mountains, and loved spending time with his grandchildren. He found much joy in gardening, fixing things, playing billiards, golf and fishing. He was greatly loved and will be deeply missed by all of his friends and family. The memorial service for Gary will be held Saturday August 10, @ 1:pm, at the Kingdom Hall of Jehovah's Witnesses 2217, West Vine Drive Fort Collins, Colorado 80521.

The family of Gary Wayne Cooper created this Life Tributes page to make it easy to share your memories.