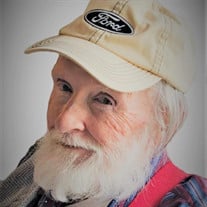 Gary Charles Doughty, 84, of Fort Collins, CO, passed away on July 7th, 2021, in Fort Collins. Gary was born December 7, 1936, in Wichita, Kansas and was adopted by Frances Chesler. Growing up, he enjoyed his summers in Moreland, Kansas with his Aunt Margie Cunningham. Gary and his mom spent his teenage years in Colorado Springs, Colorado. One of his favorite adventures was working with the Sky Sox minor league baseball team as the groundskeeper. While attending CSU, he met the love of his life and most patient woman in the world, F. Patricia Gibbons in the Wesley Foundation of the Methodist Church. They were married September 7, 1958, and had two children, Linda Sue, the Washington baby, and Margaret Lynn, the Oregon baby. In 1960, they moved to Bellingham, Washington where Gary graduated from Western Washington University with a Bachelor of Arts in Education. In 1967 he earned his Master of Science in Education from Oregon College of Education. They relocated to Loveland, Colorado, for a few years where Gary taught elementary school and made some lifelong friends. Midwest, Wyoming was home for the next 14 years with both girls graduating high school in classes numbering under thirty students. There were many visits and vacations with the Colorado crew during those years. Gary spent the early years in Midwest teaching elementary school and experimenting with the open classroom concept, but moved on to Industrial Arts for the remainder of his tenure. After retiring from teaching, Pat and Gary settled in Fort Collins, Colorado, their old stomping grounds. Gary had a second career as a Park Ranger at Lory State Park. It was during this time that he met his honorary daughter, Kim Gibbs. She and her wife, Collette, have remained a constant in the Doughty family for over 30 years. Gary had more hobbies than daughters over the years. Motorcycles, cars, mechanics, building, designing, hiking, knives, guns, target shooting, telescopes and astronomy, tiny living spaces, computers, mathematics, videos, cooking, camping, trains, books, philosophy, art, writing are among the many things he spent time exploring. One of his greatest joys in the later years was being a member of the Write Group at the Fort Collins Senior Center. Gary is survived by his wife, Patricia Gibbons Doughty, of Fort Collins, CO, daughters Linda (Lothar) Doughty Kneifel of Oro Valley, AZ, and Margo (Pat) Tsunemori of Elko, NV, honorary daughters Kim and Collette Clarkson and six grandchildren; Martina, Johanna, Laura, David, Hayden and Leah. Gary is preceded in death by his mother, Frances Chesler. Per Gary’s request, a private burial was held at Prairie Lawn Cemetery in Willard, CO.

Gary Charles Doughty, 84, of Fort Collins, CO, passed away on July 7th, 2021, in Fort Collins. Gary was born December 7, 1936, in Wichita, Kansas and was adopted by Frances Chesler. Growing up, he enjoyed his summers in Moreland, Kansas with... View Obituary & Service Information

The family of Gary Charles Doughty created this Life Tributes page to make it easy to share your memories.

Gary Charles Doughty, 84, of Fort Collins, CO, passed away on...