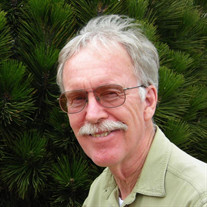 Gary Ellis Eastman, 78, of Fort Collins, Colorado, passed away on May 1, 2022. He was born on March 21, 1944, in Seattle, WA. He lived in Woodside, CA, until 1959 when the family moved to Hotchkiss, CO, where they raised fruit on Rogers Mesa. He graduated from Hotchkiss High School in 1961 and went on to receive a Bachelor of Arts degree in Anthropology from Stanford University in 1965. He served in the Peace Corps in the Dominican Republic from 1965 to 1967 and the U.S. Air Force from 1967 to 1969. He moved to Fort Collins, CO in 1969, and began working at Fort Collins Nursery in the early 1970s. In 1976, he partnered with a coworker to purchase the nursery and proudly continued his work as a nurseryman, community supporter, and self-professed Tree Nerd until his retirement in 2010 when he sold the business to his son, Jesse Eastman. Gary was an active soul and enjoyed running, fishing, and yoga. He and his wife, Kathy, loved the outdoors and spent many years climbing mountains, bagging 14ers throughout Colorado, and eating pie for strength. His lifelong passion for plants can be seen in the many gardens and landscapes he created wherever he was living. With his family he enjoyed many summer camping adventures, teaching his kids to fish and to identify wildflowers. Gary loved music, whether it was listening to John Prine, singing with his Parkinson’s group, or playing lullabies for his children on the autoharp. He was an exceptional cook, but never figured out how to cook a meal for fewer than eight people. He was quick to recognize when those around him needed a laugh and was happy to be the goofiest person in the room. Gary was preceded in death by his parents, Ben and Edwina “Eddie” Eastman and his brother, Pete Eastman. He is survived by his wife, Kathy Reid, brother Ben Eastman (Lori) of Denver, CO, children: Anna, Jesse (Pua), and Alice, grandchildren: Matt, Deanna, and Ava, great grandchild: Lyalah, and many loving nieces and nephews. A private family gathering will be held at a later date. Donations in Gary’s honor can be made to: • Friends of the Gardens on Spring Creek 2145 Centre Avenue Fort Collins, CO 80526 970-416-2486 https://www.friendsgosc.org • Colorado Open Lands 1546 Cole Blvd. #200 Lakewood, CO 80401 303-988-2373 https://coloradoopenlands.org/ • Rocky Mountain Conservancy P.O. Box 3100 Estes Park, CO 80517 970-586-0108 https://rmconservancy.org/ • Parkinson’s Support Group in Larimer County Thad Pawlikowski, Treasurer 1017 Sabatino Lane Fort Collins, CO 80521 (970) 420-0346 (Michelle Underhill, Director) https://pdsupportlc.net/wp/

The family of Gary Eastman created this Life Tributes page to make it easy to share your memories.