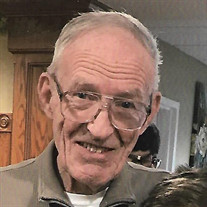 On January 11, 2020, Gene Arthur Burrell, 81, resident of Fort Collins, CO, left this earth to walk with God, his sons, and all his loved ones who have gone before him. The oldest of four siblings, Gene was born in Salida, Colorado to parents, Paul Akins Burrell and Esther Gladys Burrell. Gene grew up all over Colorado, attending schools in Grand Junction, Pueblo, Fowler, Trinidad (a one-room schoolhouse), Blende, Rocky Ford, Burlington, and finishing high school in La Junta. Growing up, Gene’s family was obviously very mobile. They mostly lived in trailers and although he said he wouldn’t live in one again, he did a lot of camping in one as an adult! Also while growing up, he spent time helping his father build roads across the Rocky mountains, working on CATs, and beginning a long engineering career. Gene met Patricia Anne Kostel at a dance at the air force academy. The two courted for five years and on November 27, 1965, they married. He converted to Catholicism because of Patricia and he loved her dearly for the remainder of his life. Gene and Patricia had three children: Paul, Dawn, and Timothy. He loved all of them greatly and was a good father. Paul and Tim proceeded Gene to heaven, where they now walk with God together. For college, Gene attended the Colorado School of Mines and CU Denver. After the birth of his first two children, he worked, went to school for his master’s degree, and was a father and husband all at the same time! Gene put his expertise in civil engineering to work as a Sanitary Engineer. For a time, he worked as an engineer in Thailand where his oldest son, Paul, was born. He was the President of the Colorado Engineers Association, and he worked for a small company that he was devoted to for the majority of his career. Weekends away, camping with his family were especially enjoyable to Gene. He loved Trout fishing, especially in the Arkansas River. In fact, he never went anywhere without his fishing gear. Other weekend activities included fixing cars and doing yard work. Steak and potatoes were his favorite, but he eventually transitioned to healthier diet of chicken and fish. He also loved cookies until he finally went sugar free. Initially, he convinced his grandchildren he was the cookie monster so they would hide all the cookies whenever grandpa was coming over. Gene was a very devout Catholic and tithed to the church every year. He always attended weekly Mass and was a member of Knights of Columbus. Gene was an avid bridge player; he played bridge with Patricia and with friends at work every day at lunch. He was very proud of the work he did in military service with Army Reserves for 6 years. Gene is survived by his wife, Patricia Anne Burrell, Lil’ Pat, the love of his life; daughter, Dawn Ross; siblings, Fred Burrell, Mary Ann Hof , and Gladyce Janky; his wonderful grandchildren, Alexander Ross, Sedona Ross, Zaiden Burrell, and Brody Burrell; and nieces and nephews, Kevin Hof, Galen Hof, Michelle Hiigel, Brian Merhar, Brian Janky, and Catherine Janky. We will miss his sense of humor, his brilliant smile, his engineering mind, and his stories from long, long ago. Walk with God, Dad. We love you. Service details are below.

On January 11, 2020, Gene Arthur Burrell, 81, resident of Fort Collins, CO, left this earth to walk with God, his sons, and all his loved ones who have gone before him. The oldest of four siblings, Gene was born in Salida, Colorado to parents,... View Obituary & Service Information

The family of Gene Burrell created this Life Tributes page to make it easy to share your memories.