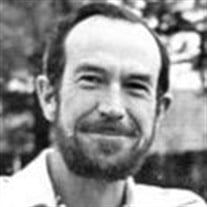 Gene Cady Wilken, 91, died peacefully at his home last week. A public service will be held at Young's Café, at 3307 S. College Ave., Ft. Collins, CO, on Saturday Oct. 5th from 2:00 to 4:00pm. A Yankee Doodle Dandy, Gene was born on July 4th, 1928, in southern California, to Alberta and Emmanuel Wilken; his sister Marjorie had been born 3 years earlier. He lettered in tennis, his life-long passion, at Modesto High School. Gene blossomed at the University of California, Berkeley, where he received a BS and an MS in Business Administration. During his years of service (1952-1955) with the U.S. Navy, Gene rose to the rank of lieutenant on board the destroyer USS Charles H. Roan. In 1960 he returned to Berkeley, and received an MA and then a PhD in geography in 1967; his dissertation was on traditional farming practices in Mexico. In 1966, Gene married Karen Kristine Peterson, and after Gene was offered an Associate Professorship in the Economics & Earth Resources Department at Colorado State University, they moved to Fort Collins, Colorado. Gene and Karen have 3 children, Oliver Cady Kuhn-Wilken, Kirsten Elena Wilken, and Huck Olin Wilken. Gene took his family along on two international research posts while at CSU, in Mexico and Guatemala (1974-75), and in Lesotho, Africa (1977-80). His book Good Farmers was published in 1987. Gene's marriage ended in 1991, though he and Karen remained friends. Shortly afterwards he took a position in the Barbados, working for USAID as a regional environmental advisor for the Caribbean. He retired in 1994, and returned home to start a real estate investment company, Overland Trail Colorado Properties, LLC. Gene competed in tennis his entire life. In 2003, he was ranked #11 in the U.S. in the 75-80 Singles category, and in 2004 he ranked first in Colorado in the same category. During the last 20 years of his life, Gene enjoyed music, travel, and dancing with his companion Maggie Butler. He danced 75 of his 91 years, especially enjoying Balkan and Dutch Hop. He loved opera, conversation, his 3 children and 5 grandchildren, and the life of the mind. He read voraciously. He was brilliant, acerbic, handsome, curious, competitive, fiercely independent, and charming. We will miss him.

The family of Gene Cady Wilken created this Life Tributes page to make it easy to share your memories.