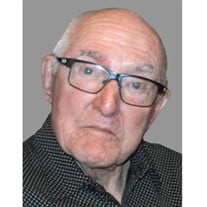 Jay Parker left us peacefully at 3pm on November 20, 2021. Jay was born in Hartley, Iowa to George Edward and Helene Parker. The first of four children, Jay always claimed he had the best childhood ever, growing up on a farm. He attended grade school in Cornell, Iowa where each class consisted of two grades. An avid reader all of his life, Jay contended that the system of multiple grades in one classroom vastly improved ones reading skills. He spent his summers fishing in the Big Sioux river, swimming in Lake Okoboji and playing in the grove outside his family home. His parents left the farm when Jay was in eighth grade and moved to Rockford, Illinois. He missed his country roots and it took some time to adjust to city life. The answer to finding happiness in his new home was a group of model airplane geeks who became his friends. They spent many happy hours building airplanes, then free flying them in the fields outside of town. This early hobby would lead to Jay’s lifelong love of planes and aviation. Jay graduated from West High School in 1945. He was active in ROTC and was on his school’s rifle team and was a skilled marksman. Immediately upon his graduation in 1945, he was drafted into the US Army. World War II was officially over, but President Truman extended the draft for one more year. Jay was stationed in Panama for the duration of his first tour of duty. Upon his discharge, he returned to Rockford, where he went to work for Woodward Governor as a machinist. In 1950, the Korean War started and as a reservist Jay was one of the first to be called back to service. After two tours of duty and now eligible for free college, Jay enrolled at the University of Iowa, where he studied mechanical engineering. He returned to work at Woodward and continued to work there until his retirement. Jay met his future wife Ruthanne, on a blind date arranged by his best friend Keith Wahlstrom. They were married in 1957 and celebrated their 64th wedding anniversary shortly before Jay’s passing. Jay was transferred to the Woodward plant in Ft. Collins, in 1966. This was a life changing event in the life of Jay, his wife and their three children. They embraced the Colorado lifestyle becoming enthusiastic skiers, campers and hikers. In addition his love of the outdoors, Jay had two enduring hobbies, fixing old cars (especially Volkswagon beetles and Chevrolet Corvairs) and flying airplanes. His children always had a car to drive as long as they didn’t mind that it was a vintage Corvair. Jay loved flying his airplane and was a member of the Civil Air Patrol for years. He was involved in many search and rescue missions and became an accomplished mountain pilot, In their later years, Jay and his wife loved long road trips , winters in Arizona and cycling. They took several cycling vacations in the US and rode along the Danube from Passau, Germany to Vienna, Austria, on one of their adventures. Jay was a quiet man who preferred “not to be noticed”. He understood how things worked and kept his cars, his kids' cars and all house systems in working order. He loved his wife, his children, grandchildren and dogs and will be sorely missed by all. While there is sadness in the loss of a loved one, there is no loss in a life well-lived. Jay lived his life well in every sense. He is survived by his wife Ruthanne, daughters Elizabeth and Catherine and son Robert (wife Diane). He has four grandchildren, Kayla, Dylan, Parker (wife Brooke) and Quinn.

Jay Parker left us peacefully at 3pm on November 20, 2021. Jay was born in Hartley, Iowa to George Edward and Helene Parker. The first of four children, Jay always claimed he had the best childhood ever, growing up on a farm. He attended grade... View Obituary & Service Information

The family of George (Jay) Parker created this Life Tributes page to make it easy to share your memories.