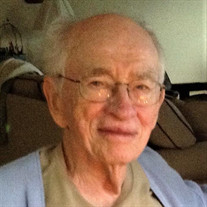 Gershon L. “Gus” Gendler, age 100, of Fort Collins, passed away on April 8, 2019. He was born in Albert Lea, MN to Joseph and Carrie Gendler. Following high school graduation, he attended the University of Minnesota and in 1940 graduated with a degree in mechanical engineering. In 1941, Gus joined the U.S. Navy and during WWII he served as a design engineer in the construction and repair of Navy ships in the San Francisco Bay area until 1946. Gus began his career as a consultant working for firms in the Bay area and in 1950 he formed G.L. Gendler & Associates, mechanical & electrical engineers. They were located in Berkeley, CA, and later moved to San Francisco. He also worked part-time as an instructor in the College of Architecture at U.C. Berkeley for 5 years. His work was on public buildings and schools, universities and hospitals. He was selected to do the engineering on the U.S. Consulate in Hong Kong in 1956. He also was involved with the Marin County (CA) Government building designed by Frank Lloyd Wright. Gus was always a progressive and creative design engineer and made notable contributions to lighting, heating, and air conditioning of schools in the area. He was also one of the first to incorporate solar design into homes in the 1970’s. He believed in alternative energy before it was widely promoted. During his career, Gus was involved in many professional organizations, and was recognized by the ASHRAE & ASPE San Francisco Chapters. He received the status of “FELLOW” from ASHRAE in 1973, and in 1995, received a 50-year member certificate. He also volunteered with the Board of Examiners for the City & County of San Francisco, as well as being President of the Board from 1972 to 1981. During the 1970’s and early 1980’s Gus was a member of the No. California, Arizona and New Mexico Solar Energy Associations, and American Solar Association. Gus joined the Sierra Club in the Bay Area and became active in hiking, backpacking, skiing, and camping in the beautiful Sierras. He met Betty Carlson at a Sierra Club meeting, and their first date was a backpack trip!! They were married in 1972 and Betty felt she had “married adventure”. Both were enthusiastic travelers and were lucky to have many great international trips from 1972 to 2007 including North, Central & South America, Mexico, many European countries, Israel, Asia (China and Thailand), and Kenya, Africa. This included 15 Elderhostel educational programs (two biking in Europe), and camping with a VW bus – the GUSBUS. He also had a love of museums. Gus sold his engineering company to a New York firm, and he became a part-time consultant. This freed them for a move to Sedona, AZ in 1982. He was the only registered engineer in Northern Arizona and continued his part-time consulting, with the El Tovar Hotel at Grand Canyon being a significant project. He was also a volunteer chairman of the Sanitary District & Board of Adjustments in Sedona. Betty taught nursing school in Flagstaff at NAU. They both fell in love with the Native American cultures and art, and found time to make trips to many Native American festivals. As Gus and Betty reached retirement age, the outdoor lifestyle, climate, social/cultural opportunities, and presence of CSU in Fort Collins beckoned them to make a second move. Over the past 20+ years, Gus and his wife enjoyed the biking and hiking trails, skiing in the Rocky Mountains, Epic ice skating and swimming. They were involved with the Senior Center and became active in the Senior Games in Greeley. They were members of the Aspen Club, Friendship Force, International Center at CSU, and Bonsai Club. They took many classes with Front Range Forum. Gus was able to pursue antique clock collecting with membership in the National Association of Watch & Clock Collectors. Gus is survived by a niece and nephew in Los Angeles; a cousin and family in Minneapolis; and by his extraordinary caregivers, Denise Wunderle, Pete Miller and Nicolette Gagliano. He is also survived by his wife’s relatives in Olympia, WA and Rodez, France. He was preceded in death by his wife and best friend, Betty; and his brother Stanley. A graveside service will be held on Saturday, April 13, 2019 at Grandview Cemetery in Fort Collins, Colorado. Memorial contributions may be made to the United Way of Larimer County or the Foothills Unitarian Church.

Gershon L. &#8220;Gus&#8221; Gendler, age 100, of Fort Collins, passed away on April 8, 2019. He was born in Albert Lea, MN to Joseph and Carrie Gendler. Following high school graduation, he attended the University of Minnesota and in 1940 graduated... View Obituary & Service Information

The family of Gershon "Gus" L. Gendler created this Life Tributes page to make it easy to share your memories.