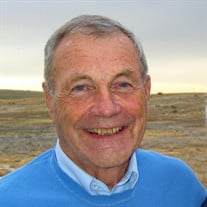 Gifford Thomas Gibson, age 82, passed away on October 27, 2018 in Loveland, Colorado surrounded by his family. Giff was the son of Alenor Jr. and Hazel Gifford Gibson. He was deeply loved by his family and friends. Giff was born in Oshkosh, WI in 1936, graduated from the University of Notre Dame in 1958 and married his high school sweetheart, Ellen McDermott. He served as an officer in the U.S. Army Reserve. He became the General Manager of the Gibson Motor Company Inc. of Oshkosh, Fond du Lac, Neenah, Menasha, and Appleton, eventually retiring as the President of the company. Mr. Gibson served for many years on the Board of Directors of the First Wisconsin National Bank. He was a past Commodore of the Oshkosh Yacht Club, a member of the South Side Ice Yacht Club, the Oshkosh Country Club, Bend OR Country Club, Sisters OR Kiwanis Club. Giff had a life-long passion for sailing; in building boats as a hobby and sailing on Lake Winnebago as much as possible. In his earlier years, he would race E Scow boats with Ellen and in his later years, he would take the family out sailing on the boats that he had designed and built. Winter was spent ice-boating, going out on exciting rides across the ice. Giff also enjoyed music and learned to play the piano by ear. He could write beautiful music or take a popular song and make a better rendition. Giff was clever and inventive, figuring out new ways to bend wood around forms, make epoxy repairs on an ice-boat after a crack-up. He even designed a gadget that would pluck a duck. And he loved tennis – a lifetime of tennis. Giff was a lifelong devout Catholic, and his faith formed who he was and how he lived. He was a positive, upbeat person who never spoke an unkind word. He will always be remembered by anyone who knew him as a gentleman with a kind heart. He is survived by his wife of sixty years, Ellen McDermott Gibson. Three children, Kimberly (Mark Romerein) Lindberg of Timnath CO, William (Chris Manuel) Gibson of New Castle, CO, Katie (Scott Bischke) Gibson of Bozeman, MT. Three grandchildren, Corrina (Brandon) Benjamin, Laura (Dillon) Dugan, Katie Lindberg and many dear nieces and nephews. He was preceded in death by his parents, sisters and brother: Jane Bergstrom, Marjorie Haase, Allan Gibson; nieces and nephews Jennifer Bergstrom Sitter, William Bergstrom, Rochelle Haase, Dennis Kammerer. A Memorial Mass will be held at 10:30 am on November 17 at Saint Elizabeth Anne Seton Catholic Church, Fort Collins, CO followed by interment in Grand View Cemetery, Fort Collins, CO. In lieu of flowers, memorials could be made to the following: Oshkosh Area Community Foundation for the benefit of the Oshkosh Yacht Club, 230 Ohio St. Suite 100, Oshkosh, WI 54902. Pathways Hospice of Fort Collins at Pathways-care.org or Alzheimer’s Association of Fort Collins CO, 415 Peterson St. Fort Collins, CO 80524.

Gifford Thomas Gibson, age 82, passed away on October 27, 2018 in Loveland, Colorado surrounded by his family. Giff was the son of Alenor Jr. and Hazel Gifford Gibson. He was deeply loved by his family and friends. Giff was born in Oshkosh,... View Obituary & Service Information

The family of Gifford Thomas Gibson created this Life Tributes page to make it easy to share your memories.