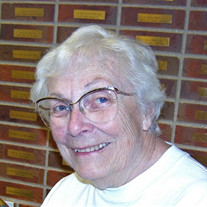 Gladys lived a good and faithful life and peacefully was called to heaven on January 30, 2017, at the age of 97. Her last few years were dogged by Parkinson's and pain, so it was a blessing for her to step into heaven and experience the perfection... View Obituary & Service Information

The family of Gladys Claire Kunter created this Life Tributes page to make it easy to share your memories.

Gladys lived a good and faithful life and peacefully was called...