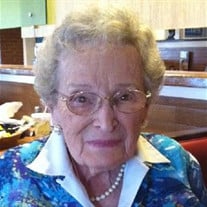 Grace Culbertson Jordan, 96, of Fort Collins died Saturday, December 31, 2016. A memorial mass will be celebrated at 10:00 a.m., Saturday, January 14th at St. Joseph Catholic Church, 300 West Mountain Ave., immediately followed by private interment at Grandview Cemetery. Grace Margaret Culbertson was born May 12, 1920 in Geneseo, N.Y. She graduated from Hiram College with a B.A. Degree in Library Science. In 1946, Grace married Russell Thomas Jordan (1919-2003). She and Russ were married for 57 years. Grace is survived by her 6 children, daughter, Carol Newton of Bronx, N.Y.; daughter, Sallie Hurley of Englewood, CO; daughter, Susan Hahn of Kiowa, CO; daughter, Janet Morton and daughter, Ann Marie Fuller of Fort Collins, CO and one son, Thomas Jordan also of Fort Collins. Grace had 12 grandchildren and 16 great grandchildren. She is remembered, among many things, for her faith, her vocation as wife and mother, her many friendships, her abilities as an accomplished seamstress and for her love of the game of bridge.

The family of Grace Margaret Culbertson Jordan created this Life Tributes page to make it easy to share your memories.