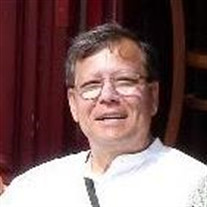 Guillermo Houghton, beloved husband of Nancy, and father of Diana Maria and Samantha Anne, fell asleep in the Lord just about forty minutes after midnight on March 18, 2017. He is also survived by his brothers, Jose Enrique and Roberto Victoriano, grand-daughter Josephine, and by many nieces, nephews, and cousins. Guillermo was born on October 9, 1946 on Finca 16 in el Negrito de Yoro, Honduras. He was the son of Charles William Houghton of Rugby, England and Dorila Canales Alonzo of San Francisco de Coray, Honduras. He spent his youth in the village of Santa Rita de Yoro partaking of the natural delights of living in the tropics in the 1950s. He enjoyed riding horses, running though the many banana fields, swimming in the nearby river, and playing soccer (futbol) in the local soccer field. Less delightful pastimes included chopping wood for the stove, caring for their horses, and running all kinds of errands. For a time when he was 10 years old he served as his village’s mailman walking many miles everyday to deliver the mail. By this time his father had died and serious help was needed to support his mother and brothers. Guillermo was an apt student and was selected to read a historical document to his village on the occasion of September 15th, the Independence Day of much of Latin America, when he was 10 or 11 years old. In those years his family was too poor to provide shoes for him. He cleaned his feet and carefully and wore his best clothing so that his presentation would be seriously received. After completing 8th grade he stopped attending school for a while (money troubles) and received training to become a tailor. After two or three years of sewing men’s suits, he received a scholarship to attend high school at El Instituto Evangelico in San Pedro Sula. He spent the next four years as an exemplary student at the Instituto Evangelico, serving as the editor of his school paper and upon graduation received a gold medal for earning the highest exit exam grade in all of Honduras. Back to work for awhile –attending the local university. A break came his way when he won a scholarship to study geology at the Mackay School of Mines, University of Nevada, Reno. It was in Reno that Guillermo and Nancy met each other in class, fell in love, and married. Their eldest daughter, Diana, was born in Reno in their first year of marriage. After graduating with a Bachelor Degree in Geological Engineering, Guillermo was offered a position at the Direccion de Minas e Hidrocarburos in Tegucigalpa, D.C., Honduras. Back to the jungle. This time he was mapping and searching for mineral deposits, especially gold. Using four wheel drive vehicles and sometimes mules depending on the difficulty of the terrain. After a couple of years, Guillermo was appointed as the Chief Geologist for Honduras. Guillermo and Nancy had their youngest daughter, Samantha, born in 1979. He continued to work in Honduras until the violence of the civil war in next-door Nicaragua escalated and began to spread to Honduras. It was then decided that it was time to return to the U.S. Guillermo found a job as a geologist for Mobil Oil and spent the next 15 years of his life successfully exploring for hydrocarbons in the U.S. and South America. Most of the time was spent in Dallas, Texas with the exception of a three-year stint in Bakersfield, CA. The time spent in Bakersfield was one of his favorite times and also that of the rest of the family. Guillermo worked for Mobil until his retirement. He loved his work and took much pride in those years. Telling the facts of his life does not afford insight into his personality. His typically dry humor could be contrasted by silliness such as that shown in a Mel Brooks film, or by Monty Python in such skits as the ministry of Silly Walks …or perhaps by realizing that no one expects the Spanish Inquisition. He had a love of the Beatles and western music especially Willie Nelson, Waylon Jennings, and Tom T. Hall. He enjoyed a beer and a good joke (even a pun sometimes). The occasional whisky or tequila was also much appreciated. Samantha likes to thinks of him as “The Most Interesting Man in the World”, (Dos XX advertisements). Diana looked at him as a source of inspiration and her adored father. He had a generous heart and whenever his travels took him to South America he would return with interesting gifts for all. He loved history, the characters that shaped it and the events that defined it. In his free time, he learned to fly a plane. There seemed to be nothing that he could not repair. He had a mind for how things worked. A few years ago, he became serious about his spiritual life, joining the Greek Orthodox Church and began his struggle to reconcile with the Lord. The last 9 years he has battled with Parkinsons Disease, an illness that robbed him of the ability to do the things he loved. It dulled his once sharp mind, although occasional flashes of his old self would surface. Next cancer came along and short-circuited the Parkinsons decline, ending his life. Even though we all knew his end was near, it has been a terrible loss.

Guillermo Houghton, beloved husband of Nancy, and father of Diana Maria and Samantha Anne, fell asleep in the Lord just about forty minutes after midnight on March 18, 2017. He is also survived by his brothers, Jose Enrique and Roberto Victoriano,... View Obituary & Service Information

The family of Guillermo Houghton created this Life Tributes page to make it easy to share your memories.

Guillermo Houghton, beloved husband of Nancy, and father of Diana...