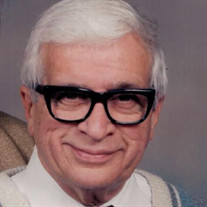 Harvey Lockwood Baker was born on January 12, 1924 and died on July 27, 2018 at the age of 94. Harvey is preceded in death by his loving parents, his siblings, and his son Joseph Dean Baker (Jeanne). He survived by his wife Sylvia, his son John Baker (Lisa), his daughter Teresa (Bob), and son-in-law Wayne Stockley. Harvey was the proud grandfather of six grandchildren: Joseph Dean Baker, Sarah Baker Veith (Tony), Emily Skrocki (Drew), John Stockley (Emily), Adam Stockley, and Natalie Stockley (Kraig), as well as his three great-grandchildren: Marley, AJ, and Macy. Harvey was raised during the Great Depression in Fairfield, Connecticut and was one of only 5 children in his small factory town to graduate from High School. After high school he was awarded a scholarship to attend New London Junior College (now known as Mitchell College). The college soon closed its doors as the war grew more intense. On December 7, 1942 at 18 years of age Harvey enlisted in the Army. On D-Day, June 6, 1944 Harvey was just 20 years old as he embarked on his 9th combat mission on a B-17 heavy bomber as a ball turret “belly” gunner. He completed his 25 missions over a course of 3 years. Harvey composed a brief memoir of his time in the 94th bomb group. In his memoir he describes, “a thousand more stories can be sandwiched in between the foregoing events, but those are the highlights as best I can reconstruct them... I guess you can say we were common guys doing an uncommon thing.” He goes on to sate, “Enemy fire passed my ears many times. Our aircraft was often riddled, my friends wounded and still I was spared. So I must conclude that God had another plan for me and that plan was Sylvia and the Church which she revealed to me and the wonderful children she blessed me with... and our beautiful grandchildren.” Harvey knew that God’s plan for him was a long and happy marriage of nearly 73 years to the love of his life, Sylvia. He described his life with her as “unbelievable” and “fabulous” and recalls the Church and his family as two of his greatest blessings. Harvey taught kindness by example.He loved making people laugh and carried your burdens if he sensed they were troubling you. He was constantly concerned about your spirit’s well-being and happiness. He moved away from his childhood security for love, and accepted his extended family as his own, embracing those cultures and beliefs with open arms. He was very sensitive, emotional, kind, gentle and compassionate to all. We are forever grateful for his service to this country and he will always be remembered as “common man, doing an uncommon thing”. The Rosary will be said July 30 at 7 p.m., and the Mass of Christian Burial will be celebrated at 9:30 a.m. July 31, both at St. Joseph’s Catholic Church, Ft. Collins. A Veteran’s Honor Guard Ceremony and reception for friends and family will follow in the church basement. In lieu of flowers, memorial contributions may be sent “In Memory of Harvey Baker” to St. Joseph’s Catholic Church, 101 N. Howes St., Ft. Collins, CO 80521.

Harvey Lockwood Baker was born on January 12, 1924 and died on July 27, 2018 at the age of 94. Harvey is preceded in death by his loving parents, his siblings, and his son Joseph Dean Baker (Jeanne). He survived by his wife Sylvia, his son... View Obituary & Service Information

The family of Harvey Lockwood Baker created this Life Tributes page to make it easy to share your memories.