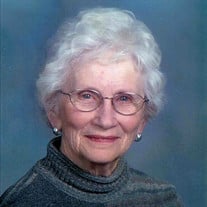 Helen Barrett, 92, of Fort Collins died Wednesday, November 14, 2018 surrounded by her family. Helen Gertrude Duff was born March 23, 1926 to Cecil and Isabel Duff on the family farm in Warren County, Iowa. The family moved to Des Moines, Iowa when she was in grade school. Helen graduated from East High School in Des Moines in 1944 as the class salutatorian. Soon after World War II she met a newly returned naval officer then working at a local Dairy and Ice Cream factory. A chance delivery of ice cream to the Duff house resulted in the marriage of Helen to John (Jack) W. Barrett on April 17, 1947. From this union they were blessed with seven children. Seeking opportunity Helen and Jack moved their family to Fort Collins in 1967. Faith and family were at the core of Helen’s life. She was a devout member of St. Joseph’s Catholic Church since arriving in Fort Collins. She and Jack spent many hours volunteering for the parish by collecting clothing for Mary’s closet, helping to run St. Joseph’s annual Archbishop’s Drive, assisting with funeral receptions and even getting her kids to help clean the church on occasion. She was a wonderful wife, mother and grandmother. She always made you feel like you were the most important person in the room. She found joy in others’ accomplishments and had great pride for all her children and grandchildren. Her mother’s philosophy was to encourage faith, curiosity, caring for others and duty to family through hard work. After arriving in Fort Collins she made many new friends and often hosted very boisterous bridge parties. She enjoyed visiting Estes Park and the Poudre canyon and showing off the beauty of our state to the many visitors from the Midwest that made it to her door. Helen kept herself busy by keeping the books for Johns Office Equipment and later working for the Fort Collins Public Library and the Registrar’s Office at Colorado State University. In her retirement, she spent many months each year at her brother Jim’s home in Urbandale, IA helping to care for his wife who was afflicted with Alzheimer’s. Jim and Helen were quite close in their later years calling each other every day. Jim was recently honored by a Des Moines television station as being one of the nicest people in the city. In that, they were two peas in a pod. Helen is survived by her children, Linda Greenley (Douglas) of Moorhead, MN, Daniel (Sharon) of Keenesburg CO, John, Thomas (Julia) and Mary Beth Moreng (Charlie) all of Ft. Collins, and Jennifer Kinion (Rob) of Longmont. She also leaves 19 grandchildren, 23 great grandchildren and 2 great-great grandchildren. She is also survived by her brothers James, and Joseph of Des Moines, brother-in-law, James Barrett, as well as many nieces, nephews and cousins. She was preceded in death by her husband, infant son Kevin Joseph, and her brother William Duff. A funeral mass will be on Thursday, November 29 at 2:00 pm at St. Joseph Catholic Church in Fort Collins. Goes Funeral Care is in charge of the arrangements. Helen requested that donations be made to St. Joseph Church in lieu of flowers. Interment at Fort Logan National Cemetery Friday, November 30 at 10:15 am.

The family of Helen D. Barrett created this Life Tributes page to make it easy to share your memories.