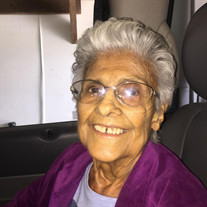 Isabel Sabala, of Fort Collins, CO she passed away at her home peacefully 3/20/2022. Isabel was born on May 15, 1935 in Garden City, Kansas, to David & Barbara (Zupanic) Rodriguez. she then made her home in Scottsbluff, NE. She grew up and received her education & graduated from Scottsbluff Sr. High school. She later met/married Anthony Sabala and into this union 5 children were born. She spent her early years, raising her children until she went to work for the Scottsbluff Public school system. There she worked for 20+ years until her retirement, but even after her retirement she then volunteered with the schools. She also spent her summers working for the Migrant School Program for 20+ years as well. She very much enjoyed that part of her life. In her past time she volunteered for many church functions which included the food bank, and fall festival and summer fair with her Sisters. Also, she very much enjoyed the holidays when she would make her delicious Tamales with her Sisters. She loved to spend time with her Sisters, do her daily walking and their weekly coffee time all together. She also was an avid sports fan, loved her Huskers and Dodgers, loved Sundays during the football season as she was a great Dallas Cowboys fan. Above all her cooking was the best, she loved to bake cookies & cinnamon rolls for her grandchildren and share her recipes to be carried on. Isabel is survived by her 5 children, sons and daughters-In-laws Anthony (Jeri) Sabala of San Diego, CA; Daniel (Martha) Sabala of Gering, NE; Gabriel (Virginia) Sabala of Scottsbluff, NE; daughters and sons-in-laws Patricia (Lawrence) Nero of Fort Collins, Co; and Sabrina (Mark) Magyar of Smithton, PA. She is also survived by 12 grandchildren, and 14 great-grandchildren. Siblings Marcella Castaneda of Scottsbluff, NE and David Rodriguez of Nampa, ID. Isabel is preceded in death by her parents David and Barbara, and her Sister Virginia Quevedo. There was a small family gathering in Fort Collins, CO for her immediate family only. Dugan Kramer Funeral Home in Scottsbluff, NE is assisting with arrangements. Rosary will take place at Our Lady of Guadalupe Church at 10:00 am and Mass of Christian burial at 11:00am.

Isabel Sabala, of Fort Collins, CO she passed away at her home peacefully 3/20/2022. Isabel was born on May 15, 1935 in Garden City, Kansas, to David & Barbara (Zupanic) Rodriguez. she then made her home in Scottsbluff, NE. She grew up and... View Obituary & Service Information

The family of Isabel Sabala created this Life Tributes page to make it easy to share your memories.

Isabel Sabala, of Fort Collins, CO she passed away at her home...