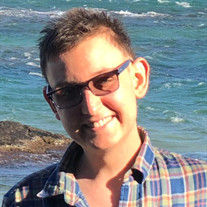 Izaac Jacob Kinnison age 19 was home surrounded by love when he peacefully departed this life on February 8, 2021, after a nine year battle with brain cancer. Izaac was born in Fort Collins November 27, 2001, to parents Lisa and Wade and was the younger brother to Zeke. He packed an immense amount of life into his short 19 years, leaving an imprint on all of those around him. In addition to Fort Collins, he and his family lived in Windsor, Severance, Steamboat, and Aurora. Known by many as the “Salty Dawg”, Izaac was a caring soul with a competitive nature. Early on he excelled at math and loved counting. Games were a prime example of his joy of numbers from Fruit Ninja and Taptiles to card games, dice, Yamslam and Yahtzee – finally resorting to solitaire when everyone else was worn out. Izaac was always up for an adventure. He loved biking. He started mountain biking as a cub scout then during middle and high school his biggest joy came from the independence his bike gave to him. Izaac was happiest when he could get outdoors and wanted to hike a fourteener. He did get to hike Horsetooth Rock just 100 days after being in a coma from his final stem cell transplant. A “Pandemic Graduate” along with his 2020 Class at Fossil Ridge High School in Fort Collins he enjoyed going to school and was still attending virtual classes until his last week with us. Izaac’s caregiving shone through in the way he cultivated and cared for tomatoes, succulents (succi farming) and the many plants in his garden as well as in the way he cared for people. At Overland HS in Aurora, he began taking classes to be a CNA so that he could care for others. Other people were often his focus, he truly was a helper of all: dedicated sous chef at home, a faithful co-pilot for car rides short or long, and he was brilliant at making people smile. He won several volunteering awards both in school and in his community. Giving was so important to him his final gift was in donating his brain for research after his passing so that he could help other kids have a better chance of surviving. Humor carried Izaac through to the end. He had a wild sense of humor, not always appropriate, that he shared freely. While he was going through treatment, he was ready with witty banter, TV commercial jingles, Izaac’s own parodies of songs, terrible jokes he found on Pinterest and Snapchat photo filters. Even through the biting humor, he grew to know and exude kindness in his life. After painful procedures, he was sure to say, “thank you” to his nurses, doctors, therapists and all people he encountered daily. He embraced helping others in his classes at school, reaching out to other kids struggling at camp and had a true knack for being able to engage people of any age in deep conversation. He never hesitated to tell people how much they meant to him. Many of his favorite things will continue to remind family and friends of Izaac…sunrises and sunsets, giraffes and pugs, chocolate, water drops and rainbows plus the many beautiful photos he took. Those whose lives were intertwined with Izaac’s included the doctors, nurses, volunteers, staff and medical professionals at Children’s Hospital Colorado, especially those in oncology who treated him across the years. The children and families we met during his cancer journey; and all the folks at Brent’s Place, where the family spent so much time during Izaac’s treatment and recovery. Foundations near and far, too numerous to list providing anything from meals, books, vacations, photography items, and overall fun for kids and families experiencing life threatening illnesses. Additionally, the faithful friends in all our communities the valiant efforts to help support the family so they could carry Izaac through this world as long as possible. He is survived by his parents, Lisa Wentz-Kinnison and Jon “Wade” Kinnison and brother Ezekial “Zeke” Kinnison, Grandmother Wanda Wentz all Fort Collins, Grandparents Jon and Miriam Kinnison, St. George UT, Grandparents Mary and Tony Swartz, Chandler AZ. Aunts and Uncles and “the cousins” from one corner of the US to other, family meant the world to Izaac. Izaac was preceded in death by his grandfather Robert J. Kleese. It was important to Izaac that when people gathered to remember him, it would be a celebration, a “party.” In honor of this request, Izaac’s Celebration will be held on July 24, 2021 West of Fort Collins. For those interested in attending, please contact Goes Funeral Care at 970-482-2221 to be added to the invitation list. The celebration will also be recorded for those unable to attend. In lieu of flowers or gifts, we ask that you donate to one of the many foundations that have supported the family, Children’s Hospital or Brent’s Place.

Izaac Jacob Kinnison age 19 was home surrounded by love when he peacefully departed this life on February 8, 2021, after a nine year battle with brain cancer. Izaac was born in Fort Collins November 27, 2001, to parents Lisa and Wade and was... View Obituary & Service Information

The family of Izaac Kinnison created this Life Tributes page to make it easy to share your memories.

Izaac Jacob Kinnison age 19 was home surrounded by love when...