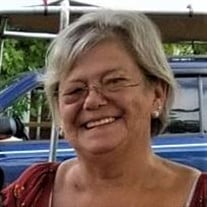 Jacklin (Jackie) Anne Mascarenas, resident of Platteville Colorado, passed away on Sunday, February 28th, 2021 surrounded by loving family. At the time of her passing, she was in Greeley North Colorado Medical Center due to health complications. Jackie’s entire life proved her to be a most beloved and compassionate person to all who met her and she will be greatly missed by her large community of family and friends. Jackie was born on August 12th, 1951 in South Dakota, as the second of what was to be four Engel siblings. She was named after her favorite Uncle Jack, who was known to sneak her a licorice or two. Jackie and her family moved to Colorado after her early childhood years, where she attended school, started a family and created a life full of love and care for all who entered the doors of her home. Jackie also spent time as a bookkeeper and self-employed venturer, which allowed her the opportunity to meet and appreciate all characters of life. Jackie is most known for her welcoming and open heart, a trait that was nurtured from the beginning of her life being raised in a close, loving home. She would often be the child to bring home a stray animal in need of TLC, or the classmate to be one’s buddy if she discovered they were alone. Later in life, all her children’s friends would come to know her as Mama Jackie, or their Colorado Mom. In recent years she helped care for her grandchildren and it is evident that her example has taught those in her environment to carry on this nurturing baton in their own personal lives, thereby ensuring Jackie’s compassionate legacy will never be forgotten. When Jackie left this world, she was greeted on the other side by her father Luckey, whom Jackie missed every day since his passing in 1985. She was also reunited with her grandparents, several aunts, uncles, cousins, and many of her husband’s family members, as well as a circle of close friends ready to continue the party upstairs. Jackie leaves behind several family members including her husband, Joe, her children Travis, Rachel, and her son’s spouse Kristine, and Jackie’s most proud sources of joy, her grandchildren Isaac, Lydia, Reighly, Colton, Dristin, and Quinten. She is also survived by her mother, Anita, and her siblings Richard (Linda), Barbara, and Steve. Additionally, there are a vast number of extended family members, in-laws, and friends who join in grief over the loss of her life. Jackie’s family would like to extend their deep appreciation for all who loved and cared for her, and for those who are continuing to send their love, support, and donations to her family as they navigate around these difficult times. They would also like to thank Goes Funeral Care & Crematory Inc. for their humanity and handling of affairs. A celebration of Jackie’s life will be held on March 21st, 2021 at the Moose Lodge (11449 York St. Northglenn, CO). This will be an open house from noon-5pm for friends and family to come and pay their respects along side Jackie’s family. 5-6pm will be open for family only. Dear Daughter of Earth’s womb Sister to all living creatures And Mother who cradles human sorrows Nurturing all back to life May peace wrap your heart And love be your soul’s compass to heaven. -Anonymous

Jacklin (Jackie) Anne Mascarenas, resident of Platteville Colorado, passed away on Sunday, February 28th, 2021 surrounded by loving family. At the time of her passing, she was in Greeley North Colorado Medical Center due to health complications.... View Obituary & Service Information

The family of Jacklin Anne Mascarenas created this Life Tributes page to make it easy to share your memories.