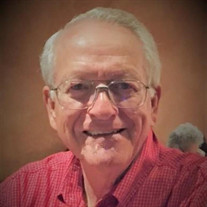 James R. Gilley passed away in Ft. Collins, CO on April 7, 2021, surrounded by his wife and daughters. James R. Gilley was born to Luther and Veatura Gilley, on March 19, 1944, in Pueblo, Colorado. He graduated from Fowler High School and received his BS and MS degrees in Agricultural Engineering from Colorado State University. He continued his education at the University of Minnesota where he received his PH.D, also in Agricultural Engineering. Jim joined the faculty at the University of Nebraska as an assistant professor in 1974, where he taught for 14 years and was promoted to associate professor and to full professor. Following his tenure at Nebraska he served as Department Head of the Agricultural and Biosystems Engineering Department at Iowa State University. In 1993, he accepted the position as Department Head at Texas A&M University, remaining there until his retirement in 2014. Following his retirement, he and his high school sweetheart and wife, Karen, moved to Windsor, CO. Jim was active in his professional society, American Society of Agricultural and Biological Engineers (ASABE), for many years and was a lifetime member. In 1993, he received the Grade of Fellow. Jim’s career was devoted to academic advancement and the education of students. Jim received the 1999 Massey-Ferguson Educational Gold Medal Award to honor his dedication to the spirit of learning and teaching in the field of agricultural engineering. Jim proudly mentored numerous engineers and scientists during his distinguished career and he made significant contributions to the engineering profession. In 2011, Jim and his wife established the ASABE James R. and Karen A. Gilley Academic Leadership Award to honor outstanding academic leadership for current and future generations. Jim was known internationally as an irrigation engineering expert and traveled around the world, collaborating with others to improve irrigation efficiency and delivery. From Africa, Asia, and Oceania to Europe and his favorite country, Belgium, he loved meeting engineers and scientists from different countries and maintained these friendships across the globe for more than 45 years. The Nebraska Cornhuskers were always near and dear to his heart and he never missed watching a game even after moving away from the Cornhusker State. He loved to golf, and gardening was his favorite pastime (especially designing the drip irrigation systems). Jim always loved being with family - his grandchildren were especially dear to him. Jim is survived by his wife of 55 years, Karen, daughter Alison Kentch (Sean) of Weatherford, Texas and daughter, Alicia Gilley of Aurora, Colorado. Surviving grandchildren are Chelsey Gilley-Dunn of Ft. Collins, Colorado, Madison Kentch of Lawrence, Kansas and Logan Kentch of Lawrence, Kansas. Also surviving is sister-in-law, Jane Stubbs of Stuart, Florida and many amazing nieces and nephews. He was preceded in death by his parents, Luther and Veatura Gilley, his three brothers, Robert, Edward and Donald, and his brother-in-law, Gary Stubbs. Memorials may be made to the American Society of Agricultural and Biological Engineers Foundation (2950 Niles Road, St. Joseph, MI 49085-9659) or the Alzheimer’s Association (PO Box 96011 Washington, DC 20090-6011, https://www.alz.org/get-involved-now/donate). Memorial arrangements are pending. “It’s never goodbye, it’s see you later”

James R. Gilley passed away in Ft. Collins, CO on April 7, 2021, surrounded by his wife and daughters. James R. Gilley was born to Luther and Veatura Gilley, on March 19, 1944, in Pueblo, Colorado. He graduated from Fowler High School and... View Obituary & Service Information

The family of James Gilley created this Life Tributes page to make it easy to share your memories.