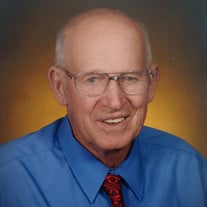 James Woodward Joyner (Jim), 88, of Loveland, Colorado passed away Friday, November 29, 2019. He was born to Samuel Raymond Joyner and Mary Virginia Woodward in Charleston, West Virginia, May 8, 1931. James and Eleanor were high school sweet hearts in Nitro High School, Nitro, West Virginia. James went to Menard, Texas with his dad to finish his masonry apprenticeship. Eleanor followed shortly after and they were married in Texas on September 6, 1949. After living in Texas, they lived in Lander Wyoming, Renton Washington, and eventually Loveland Colorado where they lived for 55 years. He was preceded in death by his wife Eleanor Mae Joyner, daughter Peggy Lynn Nickel, his parents, and his two sisters and is survived by his children Mary Catherine Joyner, James Michael Joyner, Steven Nelson Joyner, and Jeffrey Jay Joyner, as well as nine grandchildren, and eight great-grandchildren. He was a master stone mason for 58 years and continued working on projects up until he was about 80 years old. He raced homing pigeons and raised and hunted hounds in his earlier years. He loved to fish for walleye. He liked to garden and raised fruit trees. He raised tomatoes up until last summer.

The family of James Woodward Joyner created this Life Tributes page to make it easy to share your memories.