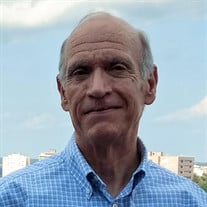 James K. Lane, Ph.D., age 71, died on September 12, 2020 in Fort Collins, Colorado. Jim was born on July 27, 1949 in Kearney, Nebraska, the third of four children of Dr. L. Dean and Frances J. (Bliss) Lane. He attended public schools in Kearney, graduating from Kearney Public High School in 1967. He attended Northwestern University in Evanston, Illinois for two years, concentrating in biomedical engineering and biology, and worked for eighteen months in Ames, Iowa. He attended Macalester College in St. Paul, Minnesota from February 1971 through May 1973, where he concentrated in philosophy, humanities, and literature. He received a B.A. degree from Macalester; graduated with Distinction in Philosophy; was selected to Phi Beta Kappa; and was a finalist for the 1973 Rhodes Scholarship competition. He then worked for four years in a brain research laboratory at the University of Massachusetts in Amherst, rising from laboratory technician to research associate. His research interests in Amherst were the structure and function of the mammalian cerebral cortex for vision. In 1977, he enrolled in the graduate program in Physiology at The Johns Hopkins University School of Medicine in Baltimore, Maryland. After finishing course work and qualifying examinations, he completed his dissertation research in the computerized analysis of the anatomical organization of the primate association cortex thought responsible for directed visual attention. After receiving his PhD in 1982, Dr. Lane moved from academics into industry. He worked from 1982-1993 at HRB Systems in State College, rising from the position of engineer to staff engineer over that time. He was a co-founder of the Signal Technology Program of SRI International in State College in 1993, and worked there until his retirement in 2011. At HRB Systems and SRI International he specialized in the design of large, computerized signal collection and processing facilities. Dr. Lane moved to Fort Collins, CO in 2011, where he purchased and enjoyed his retirement home. Dr. Lane was an avid reader in general scientific and computer engineering disciplines, and an appreciator of fine art and chamber music. He was a member of the Society for Neuroscience, the Institute for Electrical and Electronic Engineers (IEEE), the IEEE Computer Society, the IEEE Communications Society, the IEEE Remote Sensing Society, the American Society for Photogrammetry and Remote Sensing (ASPRS), the Association for Computing Machinery (ACM), and the American Association for the Advancement of Science (AAAS). He was also a member of and donor to the Fort Collins City-Run Broadband Committee. He is survived by his sister Linda Lane-Hamilton (David Hamilton) of Williamsburg, VA; brother Robert Alan Lane of Omaha, NE; sister Nancy Lee Lane of Kearney, NE; and niece Jessica Emma Johnson of Cincinnati, Ohio. The family requests that any memorial donations be made to the donor’s preferred charity.

The family of James Kent Lane created this Life Tributes page to make it easy to share your memories.