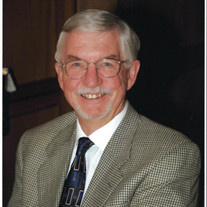 Colonel James D. Manning, Jr., USAF, retired, died of pulmonary fibrosis on September 14, 2021, the day before his 79th birthday. He was at home surrounded by family. Jim was born September 15, 1942 to Lt. James D. Manning and Mrs. Norma Manning on Governors Island, New York City. During his father's Army career, Jim lived in five states and Germany, attending 12 schools before graduating from high school in San Francisco. He was privileged to have been accepted into the 6th class at the United States Air Force Academy. Jim - known to his classmates as J.D. - was a proud graduate of the USAFA class of 1964. Jim graduated from pilot training in 1965 and married Doris Beckman ten days later. He was an instructor pilot in Texas, before being assigned as a Wild Weasel pilot in the F-105. Jim flew 134 missions during the Vietnam War and was twice awarded the Distinguished Flying Cross for heroism in flight. After completing his tour, Jim returned to the Academy as an instructor while earning an MBA from the University of Colorado. He then attended Armed Forces Staff College in Virginia and served a two year assignment in Saudi Arabia, before serving as a faculty member at the Navy War College in Newport, RI. Jim lost his wife, Doris, in 1981. In 1982, Jim married Beverly Brien and they returned to the Academy. Jim later served as the base commander at RAF Upper Heyford in Oxfordshire, England, which he described as his best assignment. Jim finished his Air Force career at Mather AFB in California, before retiring with Bev to Fort Collins, Colorado in 1990. Jim was a wonderful man who was a whiz at anything mathematical. He spent his retirement traveling the world, reading voraciously, and enjoying his friends and family. Jim was a member of the Fort Collins Sertoma service club for many years. He lived a full life of service, goodness and integrity. Jim was predeceased by his parents, his first wife Doris, and his sister Staci. He is survived by his wife Bev, their four children, Kerry, Diana, Michael, Amy and their spouses, nine grandchildren, two great grandchildren, and three brothers, Bob, David and John. Jim will be inurned with full military honors at the Academy. You can honor Jim's memory by doing something kind for someone in need or by donating to Pathways Hospice in Fort Collins, Colorado.

The family of James (Jim) Manning Jr. created this Life Tributes page to make it easy to share your memories.