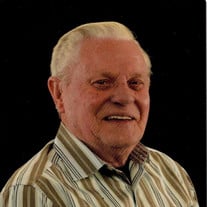 James Peter Petersen, 79, passed away November 7, 2017 surrounded by family at UCHealth ICU. Jim was born in Harlan, Iowa to Rose and Horace Johnson, the 5th child of the couple's eventual 13 children on February 16, 1938. Grandma Rose and Horace instilled the value of family and Jim loved his mom's Cinnamon rolls, still a family favorite. He attended Harlan High School where he played football and ran track. After graduation, he headed West to Colorado to work in the flooring industry, and married Marilyn June Maul. They later divorced. Bradley and Julie Lynne were born to the couple in 1960, and 1964, respectively. In 1994, he and Alveta were married at Chapel of the Pines on Lake Tahoe. They had many good times traveling abroad and visiting friends in Michigan and Iowa. After retirement, they enjoyed their time in Bozeman, golfing and enjoying grandchildren at the Sweet Pea Festival. Jim loved the Broncos and attended many Super Bowls as well as golfing with his buddies at Pebble Beach and other exciting sites. He was an entrepreneur and owned Petersen's Flooring for 40 plus years, as well as the Palomino Motel, and Golf Discount. Real estate was a hobby and he owned many farms and acreages with partners along the years. A member of the Loveland Fort Collins Water Board and Soldier Canyon, a favorite memory is of his grandson, Evan, campaigning door to door for him and being reelected. As a young man, he coached Little League and valued his trophies as memorabilia from that time. Jim was an incredible grandpa and loved his grands. He also enjoyed his time with his buddies at the Broiler. A magnetic personality, we never met anyone who didn't love Papa. Jim is survived by his wife, Alveta Frank Petersen; his children, Bradley Petersen and Julie Petersen Gilmore; step children, Lauren Shafer and Brett Shafer; grandchildren, Amber Gilmore, Aaron Petersen, Alexander Gilmore, Evan Steele, Caidin Steele, and Delainey Shafer; great grands, Jaydin, Coby, and Danika, Braydin, Van, John Solano, Jamia Johnson (Ryan), Abbey McCormick, and Dannika Solano. He is also survived by three sisters, Lile Petersen (Richard), Verta Mae Larsen, and Frances Gran; and hundreds of nieces and nephews throughout the country. Jim was preceded in death by brothers, Gene, Carl, Tim, and Clem and sisters, Irene, Carol, Mary Ellen, Norma, and Linda. A Celebration of Life will take place July 28 at 2:00 pm at the Fort Collins Country Club. This was Jim's wish as he did not want loved ones traveling in winter conditions.

The family of James Peter Petersen created this Life Tributes page to make it easy to share your memories.