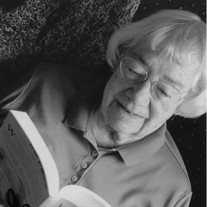 Mary Jane (‘Jane’) Graham passed away on July 13, 2018, after years of wondering why it was taking so long. Jane was born in California and spent part of her childhood in North Dakota before moving to State College, PA. As a teenager, after her friends bailed on a planned trip, she traveled alone to Atlantic City, NJ, where she worked in the front office of a sawmill, and was known by her nickname ‘Legs.’ Jane graduated from Allegheny College and continued her studies at the Katharine Gibbs school in New York City. She was a civilian employee of the army in Okinawa, Japan, and Seoul, South Korea during the Korean War. She returned home the long way with a sea voyage that took her through the Suez Canal to Europe. The highlight of the trip for Jane was watching the naked men bathing in the Red Sea. Jane travelled through Europe before returning to San Francisco, CA, to give birth to her eldest child, Lynn, who was given up for adoption. After this, Jane went to Chile to visit her parents, where her father was on sabbatical from Pennsylvania State University. In Concepción Chile, Jane met James (‘Jim’) Graham, who was stationed there as a member of the US Foreign Service. Jane and Jim married in Chile, and had four children there, Jane did duties as a diplomatic wife in Chile, Venezuela, Hyattsville, MD, and Guyana before she and Jim decided to leave the diplomatic service rather than accept a post to Viet Nam. The family travelled through the United States by car and tent trailer before choosing to settle in Fort Collins in 1969. Jane worked in Career Services at Colorado State University, and helped to place many teachers throughout the state, until her retirement in 1990. In Guyana, Jane was known for her curry dishes, which she prepared for many diplomatic parties. In Colorado, Jane was an active participant of the Larimer County Democrats, serving as Precinct Captain and hosting many caucuses in her home. She was a craftswoman who made clothing for her children, and who won top awards for her Aran knit sweaters at the Larimer County Fair. She was renowned for her homemade bread, and for the potato salad with homemade mayonnaise that she provided for foreign student affairs, such as Day in the Mountains, and the Fourth of July picnics. She and Jim regularly hosted foreign students in their home, and Jane was an expert at expanding meals for sudden additions to the table. Jane and Jim also served as Servas hosts for many years. They found time to visit their children in Japan, Germany and New Zealand. For a time Jane pursued her passion for tap dancing. She enjoyed a good drink and a good joke; if forced to choose, she would take a good drink. At her home in Greyrock Commons, she liked to host drinks on her patio, and would always provide “Aunt Jane’s Happy Juice” as her contribution to community work events. However, Jane’s favorite activity was reading books. Jane is predeceased by her sister, Marcia Gauger, spouse Jim Graham, grandson Alexander Mack, and Nigerian foster son Charlie Ihenacho. She is survived by her children Lynn Smith (California), Bruce and Reina (New Zealand), Meg (Fort Collins), Susan and Andreas (Germany), and Barbara (Fort Collins), grandchildren Peter, Brenna, Lisa, Julia, Sebastian, Abigail, Scott, and Naomi, and one great-grandchild Peter. An informal potluck memorial in Jane’s honor will be held 2 p.m. August 18, 2018 at Greyrock Commons.

Mary Jane (&#8216;Jane&#8217;) Graham passed away on July 13, 2018, after years of wondering why it was taking so long. Jane was born in California and spent part of her childhood in North Dakota before moving to State College, PA. As a teenager,... View Obituary & Service Information

The family of Jane Gauger Graham created this Life Tributes page to make it easy to share your memories.