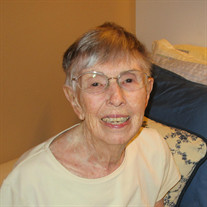 Betty Jean Blaylock, 96, of Fort Collins, died December 13, 2019. Jean was born July 29, 1923, in Ames, Iowa. When she was seven her family moved to Bryan/College Station, Texas. After graduating from high school, she attended Baylor University for two years; she then attended the University of Texas and earned a BA in English. She had a brief career as a junior high teacher in Tomball, Texas; this convinced her to pursue a degree in library science. She earned a BA in library science from the University of Illinois. Her first job was in the Austin Public Library, and she later became head librarian in the Bryan Public Library. In 1948, Jean met Lynn Blaylock, and they were married in 1950. They moved to the state of Washington, where their first child, Cathy, was born. In 1954, they moved to Fort Collins, where their second child, Sandy, was born. In 1955 the family moved to New Ulm, Minnesota, for Lynn’s career; and in 1958 their third child, Ann, was born. They lived in Minnesota for 27 years. During this time, Jean went back to school at Mankato State and earned a master’s degree in library science. She worked as a librarian in the New Ulm Public Library and later in the Hennepin County Library. Jean and Lynn retired in 1983 and joined the Peace Corps, spending two years in Barbados. Back in the States, they spent eight years splitting their time between their cabin in northern Minnesota and their home in Sun City, Arizona. During this time, their granddaughter, Stephanie, was born. In 1991, they moved to Estes Park, where they lived for four years and then moved to Fort Collins, moving to the Winslow in January 2011. Lynn passed away in 2013. Jean enjoyed scrapbooking and reading and loved plants, such as the containers of flowers she tended on her patio at the Winslow. She attended the same water aerobics class at EPIC in Fort Collins for many years. She was also a member of the League of Women Voters and of a P.E.O. chapter. A memorial service will be held at 2:00 pm, January 18, 2020 at Heart of the Rockies Church, 6501 Brittany St, Fort Collins, with a reception to follow.

The family of Jean Blaylock created this Life Tributes page to make it easy to share your memories.