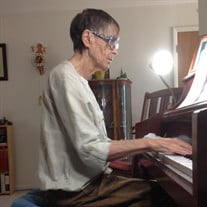 Jeanette “Nettie” Arlene Hendrickson, 81, of Fort Collins, CO fell asleep in the Lord on Thursday,12 September at home after a prolonged battle with dementia. Jeanette was born and raised in Steamboat Springs, CO, the eighth of nine children and graduated from Steamboat Springs High school. She briefly attended Westmont College in Santa Barbara, CA but transferred to Rockmont College (now Colorado Christian University) in Longmont, CO. She began playing the piano as a small girl and was gifted in improvisational playing music from memory. She played for church services and for her high school choir. Piano was her favorite past time, reading mystery novels was her next favorite. While she was away at college, her mother was diagnosed with late stage cancer and Jeanette lost her closest friend. She was still quite emotionally attached to her mother, but when she came home for her summer vacation, God had a lonesome young man, Bill Hendrickson, waiting to meet her … a filling station attendant who would give her the full service treatment; wash windshield, check oil and water, check tires … all for a 25 cent purchase of gas. He was sure she had a fellow and that she wouldn’t fall for a skinny hick form the sticks … but he sure liked her. She needed someone to transfer her love and loneliness to … as did he and that began the story of their lives. She went back to college, and they began their courtship via USPS. After she got out of school next summer, they decided that mail courtship was going to cease and they were married that summer. The new couple lived in Steamboat Springs that winter and through the next spring and summer. Then they decided to move to Boulder, CO where Bill wanted to eventually continue his education. He was hired by Safeway Stores at an entry level position and they found a humble basement apartment and settled in. Jeanette was happy with life as a full-time wife … and soon … a new mommie. The two were now three … and soon … four. Bill Jr. was born followed within a couple years by Nikki. “We will raise a family … a boy for you and a girl for me.” It took a few years to be able for Bill to enter college, but eventually they were able to get student housing and Bill joined the ‘night stocking’ crew, went to the school in the daytime, and slept when he wasn’t at one place or the other. Jeanette took the task of raising tuition money by doing daytime child care. She also took on the role of mommy and daddy, doing the budget, paying the bills, running the errands, enrolling the children in school, keeping the family in church and keeping the family glued together. Truly she earned a well deserved PHT (Put Hubby Through) degree. Jeanette’s faith in Jesus Christ has been the glue that she used to keep the family close together. Throughout the years she saw that we attended church faithfully and that the children came to a saving knowledge of Christ. She saw that our household was Christocentric. When Bill graduated from college that brought about a large change for the family. Bill’s chosen field of engineering was satisfied by accepting a position with Hughes Aircraft Company in El Segundo, CA. This was a large lifestyle change for the whole family, new town, new schools, new budget, new job, no limits on the city … one city ran into the next city which ran into the next city … there was no little quiet drives in the country every day because the country drive was hours away through the crowded traffic of the city. The whole family was homesick and as soon as possible returned to Colorado where Bill was eventually rehired by Hughes Aircraft Company in Aurora, CO. No more renting … commuting to Aurora from Boulder every day while working rotation shifts again placed Jeanette into the role of single mother. The landlord gave us the option to buy the house or find other housing, because they wanted to sell the house. Their asking price was significantly higher than Jeanette could budget … but … if we wanted to buy a new house in Aurora, we would have money left since the price of the house was a third lower than the Boulder house, plus the expense of time and gasoline to commute would be gone. We purchased a new house in Aurora and became owner rather than tenants and our lifestyle was more normal. Soon, the children were out on their own or off to college and Jeanette had an empty nest. She busied herself with practicing her piano and reading mystery novels. Bill enacted a new law at work … Wednesday is ‘lunch with wifey day’ and we held that rule until we retired. With the rapid growth of Aurora and with the children out on their own, we decided to sell the Aurora house and buy a new house in the country southeast of Aurora near Elizabeth, CO. The hubbub of the city was now surrendered to the peace and quiet of country living. Upon Bill’s retirement, we decided to sell the Elizabeth property and scale down to a nice little ranch style house in Fort Collins where Jeanette lived and loved the retirement years. Jeanette is survived by her spouse, Bill, son, Bill Jr. (Amy), daughter Nikki (Dan) Crosson, seven grandchildren, brother Clifford (Donna) Ohman, sisters, Marilyn Hendry, Gayle (John) Mauch and numerous nieces and nephews. She was predeceased by sisters Maxine Ohman, Beatrice Neish, and Audrey Jessing, and brothers James Ohman and Bob Ohman. Services will be held at Timberline Church in Fort Collins, CO at 11:00 AM on Thursday, September 19th, Pastor Darell Hailey officiating. A reception will follow the service with interment at 2:30 pm at Roselawn Cemetery on east Mulberry Ave. In lieu of flowers, donations may be made to Jeanette’s hospice care providers at myhalcyon.org of Mead, CO.

Jeanette &#8220;Nettie&#8221; Arlene Hendrickson, 81, of Fort Collins, CO fell asleep in the Lord on Thursday,12 September at home after a prolonged battle with dementia. Jeanette was born and raised in Steamboat Springs, CO, the eighth of... View Obituary & Service Information

The family of Jeanette Arlene Hendrickson created this Life Tributes page to make it easy to share your memories.