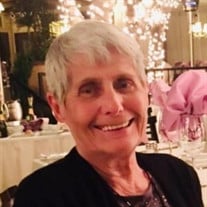 Jeanne Mae Milewski, 91, passed away on March 28, 2022, with her children by her side. Her last days were spent with her children, grandchildren, and great-grandchildren, sharing memories, stories, and laughter. Jeanne was born May 3, 1930, in Chicago, Illinois, the daughter of Victor and Ruth Hokanson. She graduated from Glenbard West High School in Glen Ellyn, Illinois, in 1948. After high school, she worked as a secretary for Houghton Mifflin in Geneva, Illinois. On November 23, 1949, Jeanne married Edward Milewski, and they spent their first years together in Michigan and Illinois. Their five children were born during this time. Jeanne was drawn to Fort Collins and the beautiful Rocky Mountains. In 1946, she rode trolley #21 down Mountain Avenue and knew she had to return! In the early 1970s, Jeanne and Ed moved to Colorado, realizing her dream of living in Fort Collins. Jeanne loved exploring and watching the birds and wildlife in the Rocky Mountains. She also enjoyed gathering and planting flowers and gardening every spring and watching the birds and butterflies. Jeanne moved to Phoenix, Arizona, in the mid-1980s and worked at TTI as an office manager. The company sent her to several conferences, and she loved the people and the work. During this time, Jeanne took care of her parents and youngest daughter as she finished high school. Jeanne loved being near her mom in the Arizona sun and enjoyed picking oranges, lemons, and grapefruit off the citrus trees. However, after several years, and the passing of her mom, Jeanne was able to return to Fort Collins and be close to her children and grandchildren who adored her. Jeanne loved tradition and holidays, and she often hosted small, intimate gatherings with five- and six-course meals of her favorite foods. She was a great cook, using recipes handed down from her mom and grandmothers. All of her meals and recipes were treasures, and the family will have her special dishes, cookies, and holiday meals for future generations to enjoy. Jeanne also had an immense love of ALL creatures, but especially dogs, birds and butterflies. Throughout her life, she cared for many dogs. The arrival of dog Mandy (she called her “Ruk Er Rue”) was the beginning of all her made-up names: “fluppers” for all dogs, “poofy parlors” for animal “spas,” “pupperluppers” for her dogs and many more. Jeanne adopted, loved, and cared for orphaned dogs, providing them with plenty of treats! An event she looked forward to every year was the Westminster Kennel Club Champions Show which she watched religiously. The entire family shares this love of dogs because of their mom, Jeanne. One of the greatest gifts that Jeanne gave her children and grandchildren was her fun-loving spirit. No one could spend time with her without knowing what a selfless, giving, and caring lady she was. Jeanne never complained and weathered every challenge in life with humor and a positive attitude. She loved her family so much and enjoyed her coffee and “lunch bucket” outings. Jeanne was also able to travel to many wonderful destinations and enjoyed being included on cruises with her beloved brother Bob, and sister-in-law Rosemary. Jeanne is survived by her son Greg and grandson Holden; daughter Karyn (Kent) Hendricks and grandson Travis; son Scott (Kim) and granddaughters Riley, Jaime, and Lindsay; son Paul (Julie) and grandsons Zach and Keegan, and granddaughters Ashley and Jacque; daughter Kristin (Andy) Anselmo and grandsons Alec and Jake; and many great-grandchildren. Her death was preceded by her parents and brother Robert Hokanson. A small funeral service will be held on April 8th at 11:00am in the chapel at First United Methodist Church. Please make any donations to your choice of animal rescues or Senior Critters.

The family of Jeanne M. Milewski created this Life Tributes page to make it easy to share your memories.