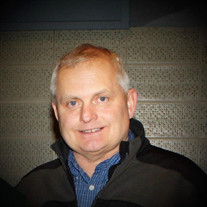 Jeffrey Carl Walbye, 58, of Fort Collins, CO, passed away on December 20, 2021 of a sudden cardiac event. Jeff was born in Rawlins, WY three weeks early on April 1, 1963 as a brilliant April fool’s joke on his parents Charles and Marie Matson Walbye. His family settled in Fort Collins, CO in 1968 when he was 5. Jeff attended Bauder Elementary, Blevins Junior High and Poudre High School where he graduated in 1981. He attended the University of Northern Colorado in Greeley for one year before transferring to Colorado State University, and after a harrowing internship in Abu Dhabi U.A.E, he graduated with a BS in Sports Science in 1985. Jeff played football throughout his youth, in high school and at both UNC and CSU until an injury prevented him from continuing. He met his future wife, Carol Jean Hecker at CSU. They dated for 18 months, remained friends for 8 years, and married in 1993. Jeff had an interest in learning to fly and started on the ramp as a baggage handler for Rocky Mountain Airlines. He moved to load planning and earned his dispatch license. He worked hard and secured loans to get the money necessary for flight ratings, and over the next couple years he flew some pretty rickety airplanes in some rather ugly weather to get the hours and experience he needed to fly commercially. In 1989 he had enough hours to be hired as a first officer on the Beech 1900 at Rocky Mountain Airlines. Continental Airlines bought the small airline and it became Continental Express. In 1994 he moved up to Continental Airlines and was initially based in Guam. He continued to fly for Continental then United Airlines for 33 years, spending the last 10 years flying internationally on the 777 and 787 out of Newark and then San Francisco. He accepted an early retirement package in April 2021. Jeff always had an entrepreneurial mind and became interested in real estate in the early 1990’s. He gradually over the years bought multiple rental properties in the Fort Collins area. He had a good business sense and was willing to take risks. He was a lifelong hunter and outdoorsman and had many adventures with friends and family. Jeff’s only son Jackson Ryan was born in 1998. Jeff was a caring, involved father and mentor to his son. He thoroughly enjoyed watching his son follow in his football footsteps and encouraged Jack to pursue his athletic endeavors, his master’s degree and property investment. Jeff enjoyed life to the fullest, living each day as though it were his last. Keeping in character with his birth date, he was the ultimate prankster, as anyone and everyone who knew him can attest to. He was a devoted husband and father, son and brother. He made sure everyone was taken care of, giving his all and expecting nothing in return. He had many circles of friends and was quick to make new ones. Every one of them has at least one “Jeff story”, and they will be fondly shared for years to come. Jeff will be sorely missed by his mother, Marie Walbye, of Fort Collins, CO, wife, Carol, of Fort Collins, CO, son, Jackson, of Spearfish, SD, sister, Sonja Mills, of Fort Collins, CO, brother, Chip (Terri), of Victorville, CA, nephews, WY cousins and relatives, airline colleagues and many, many friends. Jeff is preceded in death by his father, Charles Walbye. Sports and football in particular was close to Jeff’s heart, and he often expressed that all kids should have access to sports despite their socioeconomic circumstances. In lieu of flowers or gifts, please consider donating to the “Jeff Walbye Memorial Fund” in care of the Poudre Football Alumni Association PO Box 111, Wellington, CO 80549. By contributing to this fund in Jeff’s honor, you’ll be helping local youth afford the costs associated with pursuing their athletic goals and dreams. Per Jeff’s request, there will be no funeral, however a celebration of his life will be held on April 1, 2022 at Windsong Estate Event Center in Fort Collins. Please RSVP using the link provided: http://evite.me/5FP6tD1Nz3

Jeffrey Carl Walbye, 58, of Fort Collins, CO, passed away on December 20, 2021 of a sudden cardiac event. Jeff was born in Rawlins, WY three weeks early on April 1, 1963 as a brilliant April fool&#8217;s joke on his parents Charles and Marie... View Obituary & Service Information

The family of Jeffrey Walbye created this Life Tributes page to make it easy to share your memories.