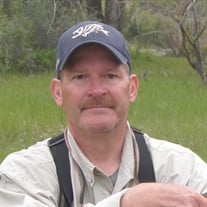 Jeff Wayland entered eternal life on December 16, 2016 at the age of 60 years old. He is survived by his daughter Laura, son William, wife Doreen, and brother Jay. Jeff was born in Virginia on December 10, 1956 to Jean and William (Bill) Wayland. Raised in Waynesboro, Virginia he regaled of the fall season and how the autumn weather would usher in a cool and calm he cherished so much. During his youth, Jeff played football as well as boxed for Waynesboro High School. With his father and his brother Jay, he would explore the north river for Brooke trout which, were his favorite fish. He moved to Buffalo, New York to work for General Motors and later became an EMT during the late 70’s. During his stint in the northeast he became infatuated with the game of Ice Hockey. By the time he moved to Colorado he was a force to be reckoned with on the ice. He absolutely loved the game; and it continued to influence the friends and relationships he made throughout his entire life. After moving to Colorado and settling in Greeley, he began to explore and enjoy the west as he imagined he always would. A constant sentiment he relayed is that he wished he could have shown his father the Rocky Mountains and her rivers and streams, their grandeur and beauty that is so unyielding and profound. He then met Jill Donckers in 1983 and they were married December 15, 1984. During their time together they lived in Stevens Point, Wisconsin and both Breckenridge and Fort Collins, Colorado. They raised two children together; William and Laura. Jeff worked in restaurants early on, but mostly as a regional sales manager for chemical companies. Jeff enjoyed doing various activities with his family such as attend movies, watch the Green Bay Packers, make blueberry pancakes, go fishing, play hockey, and enjoy their favorite foods. He loved cheering his kids on during all of their activities and he shared his love of sports with them throughout their childhood. He was always very proud of his children and loved to share their accomplishments with others. Jeff coached, refereed, and played hockey; it was a passion and something that he loved very deeply. He refereed high level collegiate games and played competitively in the Fort Collins area for several decades. He taught his son to skate on the frozen lakes of Keystone, CO. He also coached his son through Northern Colorado Youth Hockey for several years while gaining friendships and mentoring many young players. When he wasn’t coaching he was his son’s number one fan. In his later hockey career he played on traveling hockey teams as well as every Friday evening known as, “The Friday Game”, where he was able to play with his best friends and William. It was something that he cherished dearly. In 2007, Jeff met Doreen Krage. Even though he was an avid Green Bay Packers fan and she was an avid Minnesota Vikings fan, they instantly connected with one another and shared a similar passion for fishing and adventure. During their time together, they would take weekend camping and fishing trips and spend endless evenings playing gin rummy. They were able to share many moments together and experiences, one including taking a memorable trip to Hawaii. Jeff had a distinct affection and respect for nature, especially rivers, trout, and the beautiful Rocky Mountains. He absolutely loved being on the river fishing with friends and family reminiscing about old times and creating new memories. His knowledge and intuition of the river was unparalleled. Having an ability to identify insect hatches and a keen eye to river flows and seasonal changes led him to be a master fisherman and fishing guide which he most undoubtedly was throughout his entire life. He took advantage of every moment possible to take his children fishing even if it was just to a small neighborhood pond. It’s hard to put into words how much of an incredibly loving and supporting father Jeff was, sacrificing so much time and energy to support his family and children through sports and vacations. He had a deep and sincere reverence for the ones he loved; and kept in his heart the knowledge that life is indeed fleeting and told his loved ones frequently how much he loved them and cared for them. Quiet nights on rivers and lakes with loved ones or alone, Jeff held a grace and genuine poise about him that was magnetic. He could speak wisdom without saying a word, and time shared under warm and lucid starlight with him near a fire was something second to none. He will be deeply missed. A summer memorial will be held in June 2017. Please consider donations to Trout Unlimited (in honor of Jeff’s passion for fishing), Humane Society (in honor of Jeff’s love for animals), or Project Healing Waters in honor of Jeff’s high respect for veterans and helping them rehabilitate through nature.

Jeff Wayland entered eternal life on December 16, 2016 at the age of 60 years old. He is survived by his daughter Laura, son William, wife Doreen, and brother Jay. Jeff was born in Virginia on December 10, 1956 to Jean and William (Bill) Wayland.... View Obituary & Service Information

The family of Jeffrey Warren Wayland created this Life Tributes page to make it easy to share your memories.