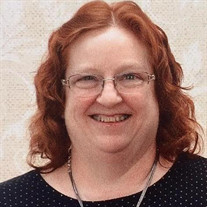 Jennifer Gwyn (Roder) McLain, age 56, Fort Collins CO, passed away at home with her family by her side on Monday, May 8, 2017 after battling pancreatic cancer. Jennifer was born Feb 21, 1961 in Moorhead, MN, to Carl Roder and Delores Langfeldt. During high school, she met the love of her life, Mark Douglas McLain. She attended Moorhead State University. Missing her love, she followed Mark to Fort Collins in 1981. She continued her education at the University of Northern Colorado. They married on July 30, 1983 in Lake George, MN. They were blessed with two children; Michael in 1988 and Sara in 1991. She worked for Colorado State University in the HR Department for almost 27 years. She was an avid reader, enjoyed cooking and baking, watching DIY shows and ghost & murder mysteries, and liked gardening. Jennifer and the family enjoyed spending time together playing board games, doing jigsaw puzzles, and traveling. In March 2016 Jennifer was diagnosed with Stage 4 Pancreatic Cancer. The family decided to make the most of the time she had, so they visited family and friends across the country, even taking an Alaskan Cruise. By September 2016 the cancer forced her to retire early from her long time employment at the Colorado State University. She was preceded in death by her parents. She is survived by her husband, Mark, of Fort Collins, Co; two children, Michael McLain, of Basalt, CO and Sara McLain, of Fort Collins, CO; three siblings William “Bill” Roder, and his wife, Tami, of Moorhead, MN, Robert “Bob” Roder, and his wife, Sherie, of Excelsior Springs, MO, and Julie Roder, of Moorhead, MN; and two nephews Carlos and Javier Roder of Excelsior Springs, MO. An on-campus Celebration of Jennifer’s Life will be held May 18th at 3:00 pm in the Cherokee Park Ballroom at the Lory Student Center at Colorado State University. The family would especially like to thank the staff of Pathways Hospice for their caring services. In lieu of flowers, please send a donation to The American Cancer Society or Pancreatic Cancer Action.

Jennifer Gwyn (Roder) McLain, age 56, Fort Collins CO, passed away at home with her family by her side on Monday, May 8, 2017 after battling pancreatic cancer. Jennifer was born Feb 21, 1961 in Moorhead, MN, to Carl Roder and Delores Langfeldt.... View Obituary & Service Information

The family of Jennifer Gwyn McLain created this Life Tributes page to make it easy to share your memories.