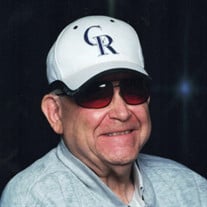 **Please note that due to health concerns with the COVID-19 virus, Jerry's fellowship tea/service has been cancelled for now. ** Stanley Gerald “Jerry” Elliott passed away on March 8th at his home in Fort Collins at the age of 84. He was a native of Fort Collins, born at the original brick building of Poudre Valley Hospital on July 30, 1935. Jerry was born to Kathryn and Gerald Elliott. He attended Washington Elementary, Lincoln Junior High, and Fort Collins High School along with his lifelong friend John Carroll. His love of sports and the kindness shown by high school coach, Frank Faucet allowed Jerry to be manager of the wrestling, tennis and football teams, enabling him to live above the disabilities of cerebral palsy, vision and hearing impairment, and diabetes. As a result, Jerry was able to letter in all three sports. He went on to attend University of Northern Colorado, Greeley, majoring in Chemistry. He also attended Barnes School of Commerce in Denver where he met his life long friends, Gene and Wanda Vandervoort, now in Prescott, AZ. Jerry then worked for the Finance office for the City of Fort Collins and retired from there after 20 years of service. In 2003, Jerry married Carol J. Carroll, widow of his life-long friend, John F. Carroll. He became stepfather to Shelley Mireles, Dake Carroll and John C. Carroll. He became loving grandfather to 9 grandchildren. Carol and Jerry spent the next 16+ years traveling to every state, visiting many National Parks and Visitor’s Centers, where video and audio presentations allowed him to hear about each park, again living above his near total blindness. Yearly trips to Arizona for Rockies Spring Training games helped him maintain his enthusiasm for sports. He taught his family to know, understand and appreciate baseball and football. His middle school grandson, Justin was ready and able to call the game plays at home by TV and also at Coors Field for his blind grandpa. Jerry was also known for his 16 years of memorizing hymns, scripture verses and tea-related poetry, which was often recited at “Jerry’s and Carol’s Tea-House” parties. Jerry is survived by his wife, Carol, three stepchildren, and nine grandchildren, as well as his most loving and kind cousins, Roger and Pam Elliott, of Oregon, Deb and Phil Johnson, of Windsor, CO, and Wendy and Ted Lopez of Commerce City, CO. Jerry was preceded in death by his parents and his sister Jackie.

**Please note that due to health concerns with the COVID-19 virus, Jerry's fellowship tea/service has been cancelled for now. ** Stanley Gerald &#8220;Jerry&#8221; Elliott passed away on March 8th at his home in Fort Collins at the age of 84.... View Obituary & Service Information

The family of Jerry Elliott created this Life Tributes page to make it easy to share your memories.

**Please note that due to health concerns with the COVID-19 virus,...