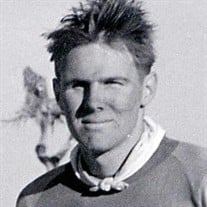 Jerry Shuler of Fort Collins died Christmas Eve morning, December 24, 2016. He passed away peacefully at home with family after a courageous battle with cancer. Jerry was born July 15, 1932 in North Hollywood, CA, the son of Phillip and Hallie Shuler. He was a 1950 graduate of North Hollywood High School and received an engineering degree from San Jose State. While in college he met his wife, Patti and the two married September 18, 1960. They both worked at Universal Studios in Hollywood in the early 60s, where Jerry worked as a grip/electrician on the Universal Lot. They had two daughters and moved to El Dorado Hills, CA in 1972. Jerry worked for Exploration Logging in Sacramento, CA until 1979 when the family moved to Fort Collins. They owned Fort Collins Instant Printing from 1979-1986. Beginning in the 1950s and throughout his life, Jerry had a passion for riding motorcycles and skiing. In the 80s, that passion grew to include mountain bikes - not only riding but also designing and building them; even patenting his rear-wheel suspension design. His talent and humbleness made him an inspiration to many in the Fort Collins cycling community for many years. During his last months, Jerry spent as much time as possible enjoying rides around Fort Collins as well as welding bicycle trailers for a local company. He was forever young at heart and loved talking and sharing about his passions and mentoring others. He was a beloved husband, father, grandfather, son, brother and friend. He cherished friendships spanning over 75 years, as well as newer ones, many with buddies half his age. He had immense pride in his grandchildren, loved the outdoors, had a memory for detail that never left him, and loved watching late night talk shows. Jerry is survived by his two daughters, Neile Neider (Mark) of Denver and Jill Land (Jonathan) of Caldwell, NJ; four grandchildren, Adam Neider, Will Neider, Delia Land and Eva Land. He was preceded in death by his wife, Patricia Shuler; parents, Philip and Hallie Shuler; sister, Suzanne Wilson and brother, John Shuler. A memorial service will be planned at a later date. To extend condolences to the family visit www.goesfuneralcare.com

Jerry Shuler of Fort Collins died Christmas Eve morning, December 24, 2016. He passed away peacefully at home with family after a courageous battle with cancer. Jerry was born July 15, 1932 in North Hollywood, CA, the son of Phillip and Hallie... View Obituary & Service Information

The family of Jerry Neil Shuler created this Life Tributes page to make it easy to share your memories.